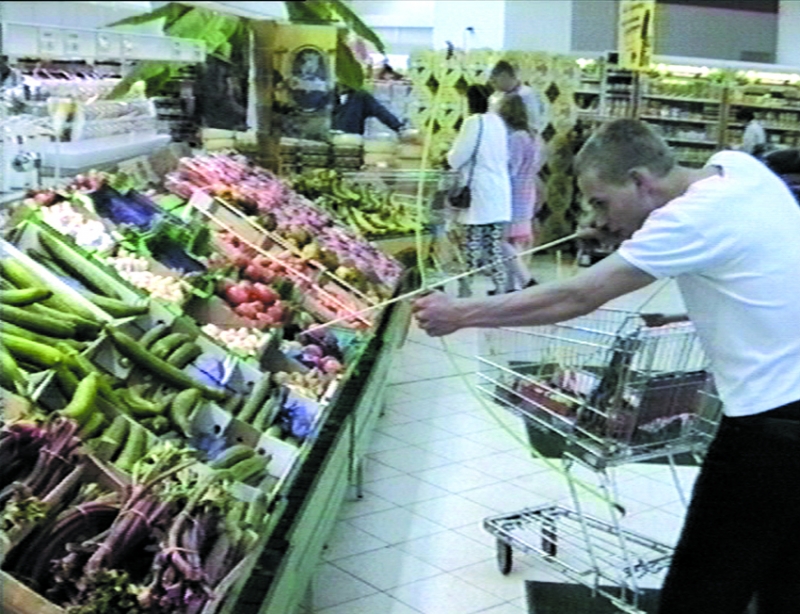 Christian Jankowski gained recognition in the 1990s for challenging conventional perceptions of art by producing his projects within interactive situations. His performative work is often captured and displayed on videos that take into account the context of the viewing space.

The Hunt, first conceived in 1992, is Jankowski’s most seminal early project, and the first of his videos to include the conceptual twists and self-reflexive humor that now define his mature practice. In this video, edited from weeklong filming, he tests the cliché of the “starving artist” while immersing himself in the realm of everyday commerce. The footage captures a young Jankowski’s quest to eat only groceries he shoots in the supermarket with a bow and arrow. The metaphors for striking success and survival as an artist are implicit. Amplifying the absurdity of “hunting” for shrink-wrapped, price-tagged products is the nonchalance of a cashier who rings up the arrow-struck items without reaction. The result is an amusing critique on the disaffected commercialization of securing sustenance, long a trope of high-adrenalin masculinity and honor in mythology and art history.

Included in the ICA/Boston’s inaugural installation in its new building, The Hunt was a gift to the museum from the artist, and it joins his 3-channel video Point of Sale, 2002. Incisively direct, the early work shows the groundwork for the latter project’s more discursive investigation of art, business, and their overlap. Differing in level of subtlety, complexity, and production value, both works frame the uncertain stakes of pursuing art in a world now defined by sales. Joining a number of other video works in the ICA’s collection, The Hunt marks the museum’s important support of video art from the 1970s to the present. 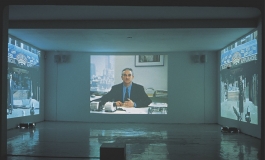