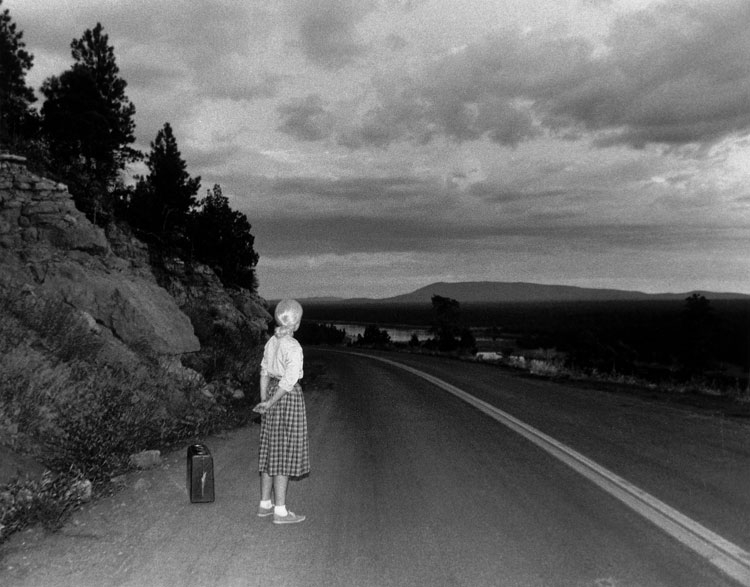 Since the mid-1970s, Cindy Sherman has been photographing herself in staged environments, transforming her appearance with costumes, makeup, and wigs. She began the series Untitled Film Stills in 1977 and continued it until 1980, by which time it comprised sixty-nine black-and-white photographic images that construct and reiterate stereotypes of postwar femininity. The series marks Sherman’s seminal foray into her now-signature practice, in which she reimagines the genre of portraiture by playing the roles of actor, director, and photographer herself. Sherman and her cohort in New York in the 1980s, including Jack Goldstein, Sherrie Levine, and Robert Longo, formed what has been called the “Pictures Generation” on account of their critical appropriation of images of consumer and media culture.

Untitled Film Still #48 shows a woman standing at the roadside with a suitcase beside her, presumably waiting for a car to round the bend and pick her up. The scene is infused with foreboding. Turned away from the camera with her arms crossed behind her back, dressed in a plaid skirt and sneakers, the woman exudes a schoolgirl innocence and naiveté that only heightens the uncertainty about her fate. A network of unseen gazes––the subject’s, the photographer’s, and the viewer’s––all situate the female figure as passive object. As in many of the Untitled Film Stills, here Sherman exploits a host of narrative tropes familiar from Hollywood movies to trigger the viewer’s imagination.

The ICA/Boston possesses a number of Sherman’s photographs, including an expanding selection from the Untitled Film Stills series. Untitled Film Still #48 enhances the ICA’s holdings of work by important contemporary photographers, including Philip-Lorca diCorcia, Rineke Dijkstra, and Nan Goldin, whose works likewise generate questions about the meaning of the staged portrait. 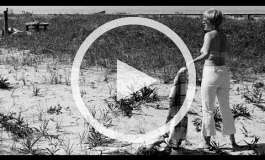 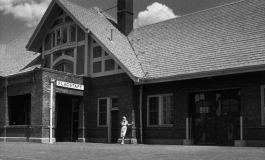 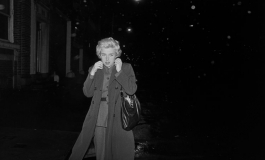 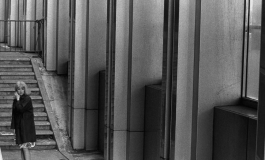