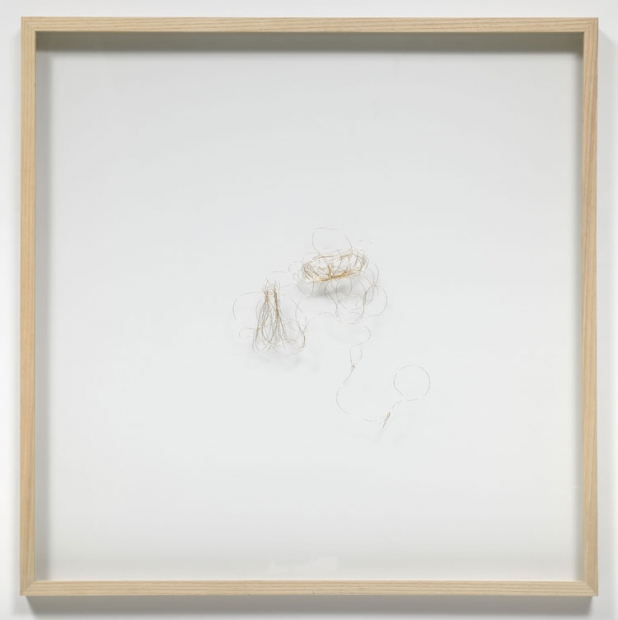 Known for her spectacular adaptation of existing materials, Cornelia Parker poetically transforms objects through conceptual and physical processes. She brings an elegant sculptural hand to the evocative metaphors she conjures in deeply compelling works.

Wedding Ring Drawing (Circumference of a Living Room) captures the conceptual richness and visual delight of much of Parker’s work. In this case, she quite literally draws the symbolic found elements, two wedding rings, into new metaphorical forms. The gold was melted into an ingot and drawn into a single thread approximately 40 feet long. Its lengthening suggested to the artist the dimensions of a living room, an association that added a note of domesticity to the unfolding narrative. She then trapped the thread between two sheets of glass, creating a “drawing” that lyrically winds around and over itself, delicately describing loops and turns, knots and kinks. Parker simultaneously evokes the history of these two abandoned rings and the possibility of renewed connection, both fragile and beautiful.

In 2000, Cornelia Parker’s first solo museum exhibition in the United States was organized by the ICA/Boston and traveled nationally. This exhibition, a landmark for both the artist and the museum, received critical acclaim as well as popular interest in Boston and beyond. This important moment in the ICA’s history is marked by the presence of two Parker works in the collection, including Wedding Ring Drawing. 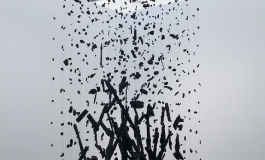