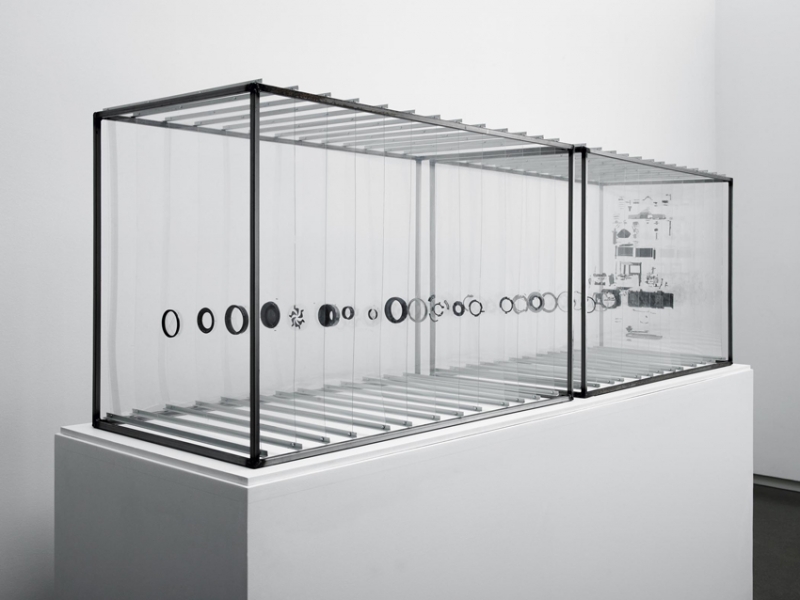 Damián Ortega is one of the most influential artists to emerge from the circle of contemporary artists working alongside Gabriel Orozco in Mexico City in the 1990s. His art exposes the underlying mechanisms and systems that make up familiar objects in the manmade and natural worlds. Ortega often disassembles and rearranges everyday objects in order to consider their elements, setting them out for scrutiny like a scientific diagram of the atoms in a molecule. His untraditional materials—tortillas, pennies, and used furniture—subvert traditional notions of sculpture.

Olympus references other works in Ortega’s oeuvre, such as the hanging installations of a disassembled Volkswagen Beetle (Cosmic Thing, 2003) and a grouping of hand tools (Controller of the Universe, 2007). In these installations, Ortega deconstructs a useful, familiar object—a common car and a toolkit—reinterpreting the way one can understand its parts and thus revealing a new relationship to the whole. In Olympus, Ortega takes apart a 35mm Olympus camera and suspends its component parts, secured within twenty-six clear plastic sheets, so that they appear to float in a row inside two cases. Ortega is fascinated by the study of vision and optics, and the relationships between seeing and technology. In Olympus, he deconstructs the mechanics of photography, stretching the camera’s zoom lens to absurd lengths as he tests the camera’s capacity for capturing an image from afar.

Gift of Mark and Marie Schwartz