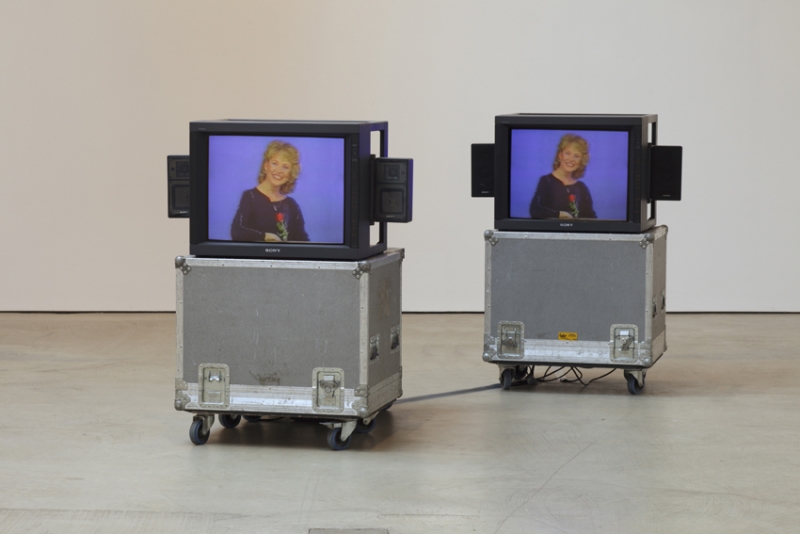 Kiss the Girls: Make Them Cry

Since emerging as one of the most important video artists of the 1980s, Dara Birnbaum has used video, sound, found footage, and an array of editing and image-processing techniques to investigate the content and conventions of television and mass media.

Kiss the Girls: Make Them Cry is a groundbreaking early work made after Birnbaum came to attention with her first solo exhibition at Artist Space in New York in 1977. Taking what would become her signature approach, the artist drew on mass media’s vast reservoir of images and editing techniques to reveal the ideological content of television. Birnbaum constructed the six-minute video from excerpts of the television game show Hollywood Squares, isolating the participants’ expressions and gestures. When strung together and repeated, these banal looks—darting eyes, craning necks, and waving hands—reveal themselves as deeply conditioned by social codes. Presented on two cube monitors staggered in space, the installation reflects the technologies of the late-1970s period, while formally reiterating the repetition at the center of the unconscious gestures. Like much of Birnbaum’s work, Kiss the Girls: Make Them Cry draws out and “talks back to” the seductive and alienating effects of mass media, especially as they inequitably implicate women.

This work by Birnbaum, one of the most important artists working in the 1980s, augments the ICA/Boston’s strong holdings of work from this period, especially those by other appropriation artists, such as Louise Lawler, Sherrie Levine, and Cindy Sherman, who were part of the so-called Pictures Generation. Kiss the Girls: Make Them Cry is also an early example of sculptural video work, a genre used extensively in recent years by such artists as Mika Rottenberg and Hito Steyerl, both of whom are represented in the ICA collection.

The Barbara Lee Collection of Art by Women.