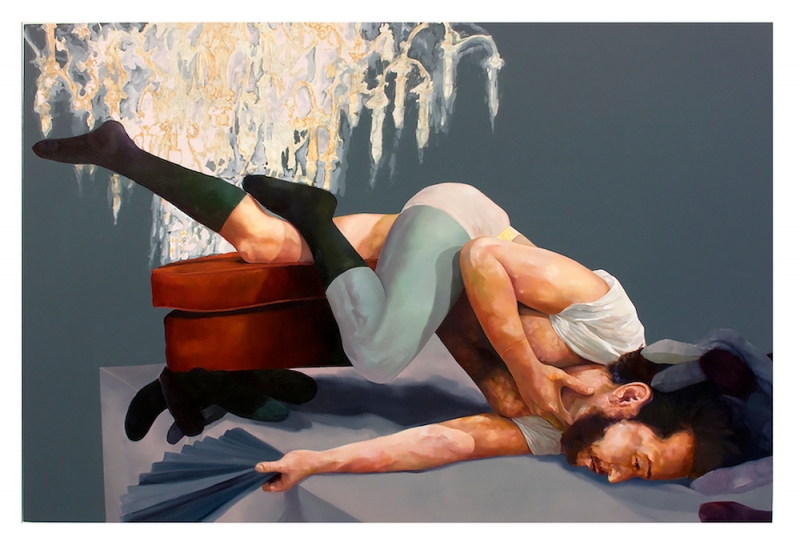 David Antonio Cruz explores the visibility and intersections of Black, brown, and queer subjects through painting, sculpture, and performance. Focusing on queer, trans, and gender-fluid communities of color, Cruz examines both the violence perpetrated against these individuals as well as their dignity and beauty. His portraits, rendered in lush colors with dramatic compositions and within elaborate environments, evoke the cycles of exaltation and suffering experienced by queer people of color.

Cruz’s thosebutterflyboys is part of the series returnofthedirtyboys/girls, begun in 2016 during the artist’s residency at Project for Empty Space in New York. In this series, Cruz portrays queer activists and members of the artist’s social circle in compositions that playfully engage art history and notions of desire, intimacy, role-play, and the gaze. Cruz created this painting in response to Rigoberto González’s memoir, Butterfly Boy: Memories of a Chicano Mariposa, which describes the author’s coming-of-age in relation to race, class, and sexuality. Used within Latinx communities, the term “mariposa” (Spanish for butterfly) is a derogatory term for men who are perceived to deviate from heteronormative and stereotypical masculine roles. Cruz follows González’s reclamation of the term by including the word “butterfly” in the title of this painting. In so doing, the artist plays with the stereotype invoked by the term, as González describes, that gay men are “light on their feet.” In thosebutterflyboys, the likeness of the artist’s longtime friend Richard appears to have slipped from a velvet ottoman and fallen onto the side of his face. As in other paintings in the series, Cruz situates the figure on a stage in an ambiguous space populated with markers of domestic luxury. The figures from this series are also accompanied by organic, phallic forms, as visible under the ottoman in this painting and which the artist understands as duendes (mischievous spirits, goblins, and sprites of folklore) and as materializations of the cismale gaze. Embracing the sensual through the figures’ graceful and contorted poses, and their exposed flesh, Cruz brings together pleasure and precariousness to express the dynamic complexities of life as experienced by queer people of color.