Over the past two decades, Ellen Gallagher has built a body of work that confronts the history of black representation. Gallagher rose to prominence as a painter of minimal paintings that toe the line between figuration and abstraction, works with which she sought to subtly undermine the perceived narrative limits of abstraction. Since the late 1990s, she has pivoted toward a more appropriative methodology, using historical vernacular imagery to explore how a history of representation manifests itself in the lived condition of blackness in America.

DeLuxe is a piercing visual investigation of the multivalent and complex role that hair, as both object and stand-in for the body, occupies in black culture. In this suite of sixty prints, Gallagher employs a panoply of mediums, techniques, and processes to alter magazine prints, incorporating collaged elements from popular black culture magazines such as Ebony and Black Digest dating from the 1930s to the 1970s. The images are sourced primarily from advertisements promoting cosmetic “improvements,” such as wigs, skin-whitening creams, hair straighteners, and hair pomades, that support the agenda of modifying black bodies to conform to white archetypes of beauty. Gallagher alters the form and content of these images through a laborious process that involves drawing and redrawing, cutting and layering, and the addition of exaggerated features, text, and non-art materials such as modeling clay, glitter, toy eyeballs, and coconut oil. These manipulations reveal the elusiveness and misguided purposes of the advertisements.

One of the most ambitious works by this important artist, DeLuxe is a central piece in the ICA/Boston’s collection of works on paper and is in dialogue with collage-based works by artists such as Arturo Herrera, Gilbert and George, and Wangechi Mutu. Moreover, it accompanies others by such artists as Glenn Ligon, Kerry James Marshall, and Lorna Simpson in the ICA’s ever-growing collection of works that directly acknowledge and investigate the history of race in America. 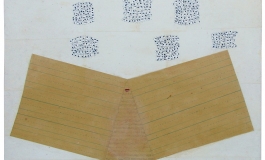