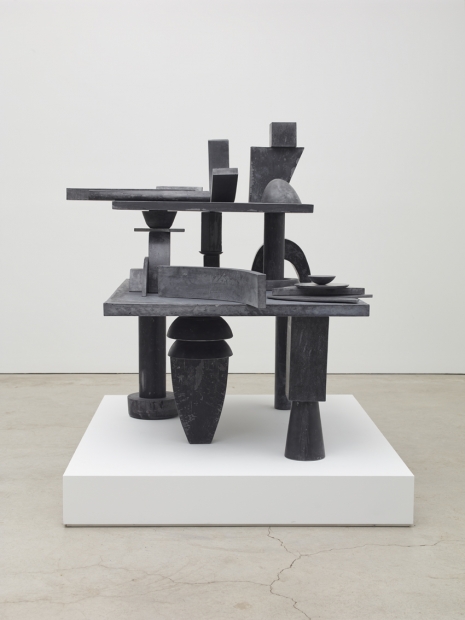 Erin Shirreff’s work in sculpture, photography, and video investigates the distorting effects of memory and perspective on the experience of viewing art. Shirreff mines the distance between the general and the specific, employing a pared-down vocabulary of modernist forms to inhabit the space between an art object and our recollection of it. Her works explore the problematic nature of the photographic index as well as the medium’s relationship to the mechanisms of vision and perception. Her investigation often assumes the form of manipulated photographs of objects that are created explicitly to be photographed and then destroyed. By bending, folding, or bifurcating the printed photograph, Shirreff creates new forms, challenging the perception of photography as static and objective.

Catalogue, 39 Parts (Value Lessons) exemplifies Shirreff’s ability to employ the essence of modernist sculpture to new effect. Comprised of an arrangement of smooth, gray geometric Hydro-Stone elements arranged atop a series of level surfaces, the sculpture alternately resembles a table, workbench, and desk. The “legs” of the horizontal planes are simplified geometric forms also culled from the visual lexicon of twentieth-century sculpture. The title references the ubiquitous nature of the forms in relation to the history of art: the objects strewn on multiple surfaces—arcs, cylinders, and cones—represent what Shirreff considers the building blocks or “blanks” of modernist sculpture. By bringing these modules together, Shirreff highlights their universality and interchangeability. Here Shirreff seeks not only to blur the line between our memory and the actuality of experience, but also to blur the divide between the functional and the aesthetic.

Catalogue, 39 parts (Value Lessons) is a singular addition to the ICA/Boston’s permanent collection, augmenting the museum’s holdings in twenty-first-century sculpture by female artists and accompanying other significant sculptural works of abstract sculpture by Taylor Davis, Tara Donovan, and Josiah McElheny. 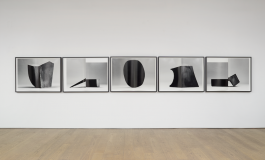