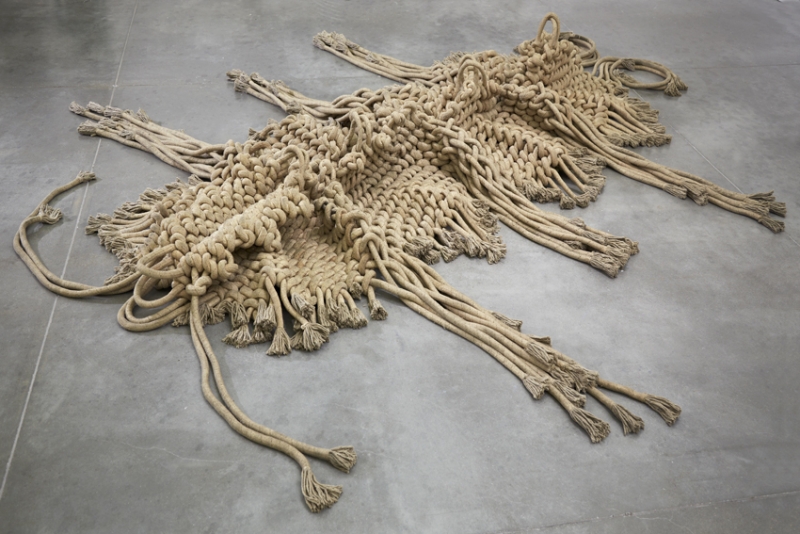 Françoise Grossen’s work is central to the wave of innovations in fiber art that took place during the second half of the twentieth century. In describing her artistic development, Grossen summarizes two of the most important ways in which artists transformed fiber in the late 1960s: “First we broke with the rectangle, then we broke with the wall.” By exploring the sheer weight of rope and its response to gravity, Grossen aligned her work with broader artistic debates taking place in New York in the 1960s and ’70s.

Inchworm’s insistent horizontality is related to avant-garde dance, which during this period was moving from the stage to the floor, as well as to contemporaneous installations of scattered scraps of industrial felt and thread. While experimenting with scale, orientation, and composition, Grossen maintained two constants: her medium and her process. She has worked almost exclusively in rope, knotting and braiding it throughout her career; rather than inhibiting her, this self-imposed limitation has facilitated her sustained contemplation of rope’s material properties.

Inchworm is a classic example of fiber art, a movement the ICA/Boston has sought to bring to critical attention and recognition, in part through the major exhibition Fiber: Sculpture 1960—present (2014), and it joins other works in fiber in the collection, such as Josh Faught’s Untitled, 2009, and Faith Wilding’s Crocheted Environment, 1972/2005.

Gift of the artist in honor of Jenelle Porter