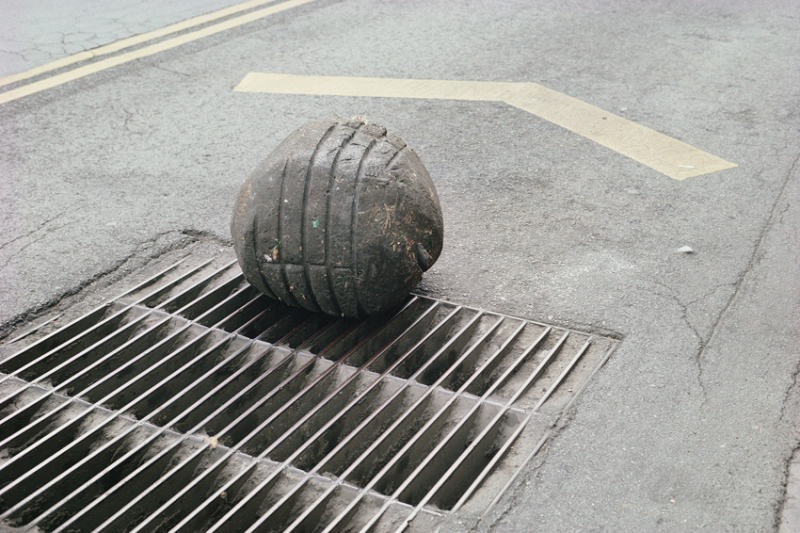 Employing a diverse array of mediums, Gabriel Orozco makes works that are infused with wit and insight. Often depicting banal objects submitted to absurd gestures, from a car cut lengthwise (La D.S., 1993) to an ice-cream cone placed on top of a bush (Ice Cream House, 1995), Orozco reveals the complicated layers that make up the quotidian with a humorous, Duchampian sensibility.

Yielding Stone Image comes from Orozco’s performance project Yielding Stone, in which he made a sizeable plasticine sphere—about the weight of his own body—that he then rolled through the streets of New York. The object picked up the street’s sediment and surface activity, literalizing the imprint of the environment. In this image, the ball has been marked by the grooves of the metal grating that covers the city’s underground power and sewage systems. The artist is both palpably present and absent: the stone becomes a stand-in for Orozco’s body, and the artist’s action is the origin of its movement. As Orozco has said about his interest in spheres, “I believe the idea of movement, circulation, containers, focus, concentration, pointing, all have to do with circular firms in motion and the connecting of circles and elements like individual bodies.” Invested in process and its visibility in works of art, Orozco pushes the definition of action-based works and their documentation through his sculptural and photographic works.

Yielding Stone Image introduces the work of an artist new to the ICA/Boston collection, and expands its geographical scope. The photograph serves as an apt introduction to Orozco’s work and joins a number of other works that explore the presence or absence of the body in everyday scenarios, from Ana Mendieta’s performative bodily imprints to sculptures by Charles LeDray and Cornelia Parker.