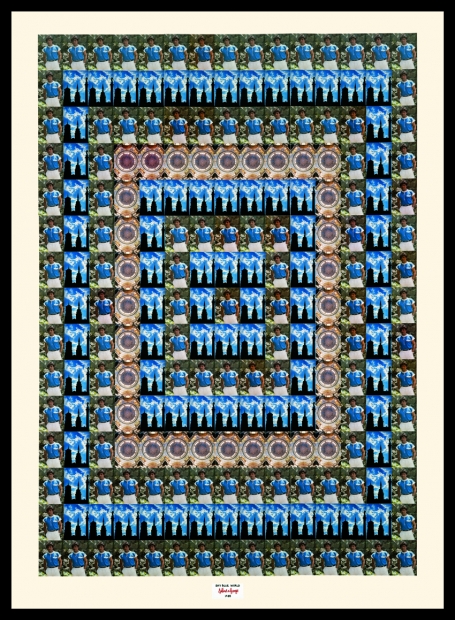 Gilbert Prousch and George Passmore, better known as Gilbert and George, have worked together since the mid-1960s. They have described their relationship in life and work by saying, “It’s not a collaboration… . We are two people, but one artist.” In the late 1960s and ’70s, they performed what they called Living Sculpture, documenting their life as art through the creation of small cards printed with captioned drawings of themselves. Always attired in three-button suits, their sartorial formality contrasts with their cheeky, avant-garde work. Their signature works from the 1970s and ’80s consist of composite photographic images assembled in a large grid and overlaid with bright flat colors. Influenced in equal parts by pop and conceptual art, these collage works blend the logic of the billboard with that of the stained-glass window to make an iconic and unique contribution to twentieth-century art.

Sky Blue World is from the series 25 Worlds. In each work in the series, dozens of identical postcards are arranged in concentric patterned fields that measure about 8 by 6 feet. Nearly every work includes the image of a handsome young man’s face multiplied to kaleidoscopic effect. In Sky Blue World more than one hundred identical postcards of Indian Bollywood screen idol Govinda alternate with postcards featuring the dome of St. John’s Cathedral in London and an architectural roofline. The intense repetition of the movie star’s face gives the montage the aura of an altar, presenting him as both a pop culture icon and a quasi-religious personage, while also gesturing to homoerotic desire in a mode akin to the work of Andy Warhol. At the same time, the mosaic pattern created by the arrangement of the postcards places the individual images in service to the pulsating, almost cinematic overall composition.

This work brings into the collection two new artists while also adding an important piece from the 1980s. Its deployment of the readymade, reference to pop culture, and photographic basis enrich the ICA/Boston’s holdings of work by artists such as Dara Birnbaum, Louise Lawler, Cindy Sherman, and Meyer Vaisman.