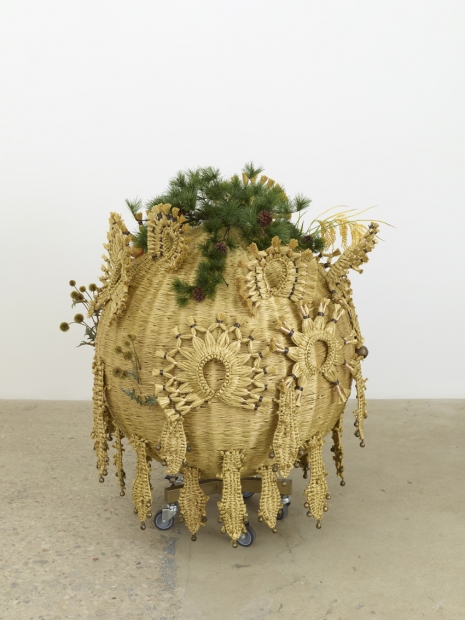 Haegue Yang makes intricate and visually-compelling sculptures from largely banal materials, including clothing racks, light bulbs, and bamboo roots. She first became known for her experiential installations consisting of venetian blinds—an important material for the artist due to its binary properties of folding and unfolding, transparency and privacy. As Yang said in a 2014 interview in Ocula, “My driving interests and motivations are often concrete, but my artistic language is one of abstraction. Abstraction is, for me, a way of thinking and working through collective and individual narratives across different histories, generations, and locations.”

The Intermediate – Inceptive Sphere comes from a larger series of straw works entitled The Intermediates. Some of the works reference actual architectural structures or are stand-alone sculptural objects or figures. Each is decorated with Asian folk objects, such as a Korean bride’s headpiece and bells that are hung from the necks of cows in India or used in shamanistic rituals, all collected by Yang herself. The critical material is straw, a familiar, even primitive material, but here Yang uses artificial, plastic straw dismissing all potential nostalgia or desire for a primal past. As with most of her sculptures, this work evokes an in-between, intermediate state, between the real and artificial, civilization and nature, and, largely, the human and spirit worlds.

This work reflects the museum’s commitment to have a more global program and to explore how artists are reconciling the ever-changing concept of the global, especially the fraught binary between the so-called East and West. In addition to the 2013 Art Wall, Yang’s work was included in the ICA/Boston’s 2014 exhibition Fiber: Sculpture 1960–Present. The Intermediate – Inceptive Sphere connects with the museum’s commitment to critically examine craft in contemporary art, as seen in the work of Nick Cave and Arlene Shechet, and joins significant sculptures by artists such as Louise Bourgeois, Marisol, and Rachel Harrison.