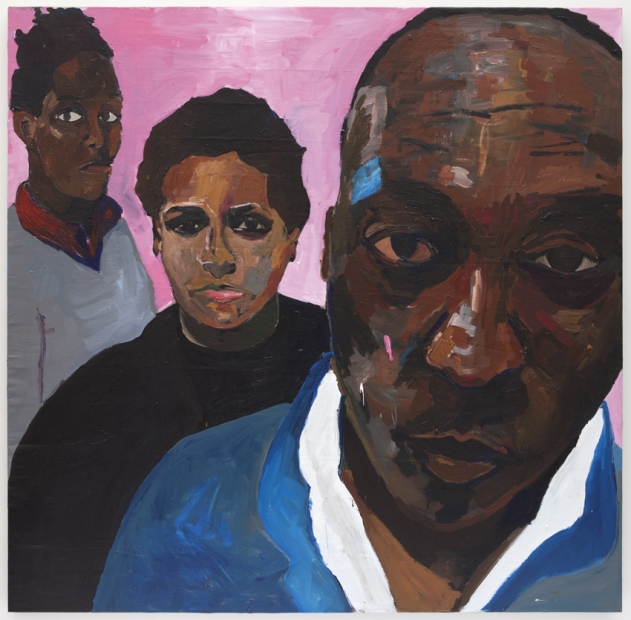 Henry Taylor depicts contemporary life in bold and direct acrylic paintings. Taylor has described his paintings—mostly portraits of people—as landscapes of his social scene, encompassing his immediate community in Los Angeles, his family, and famous African-American icons. Vitally connected to real time and space, his artwork also possesses a deep, universal humanism. Taylor received a B.F.A. from the California Institute of the Arts while he was also working as a psychiatric technician at Camarillo State Mental Hospital. Many of Taylor’s first sitters were patients from the hospital, and the experience instilled in him a deep empathy for others.

Taylor’s painting, i’m yours, depicts the artist and his two grown children, staggered in space and tightly cropped within the confines of the square canvas. Each stares straight ahead, meeting the eyes of the viewer with a penetrating gaze. They convey a sense of resolve and solidarity—their lips are pursed, they are alert, and they form a line—but also a degree of weariness. A blue smudge and painterly drips of pink and white stain Taylor’s own face, in the foreground, taking on the character of wounds or bruises. Made in 2015—a year of public revelations of police brutality against African-Americans—the family portrait stages a confrontation that reflects a sense of determination on the part of the subjects.

The acquisition of i’m yours introduces one of the foremost painters working today into the museum’s collection. While the ICA/Boston has a strong group of artworks that feature the human figure and address identity, Taylor’s painting is an important and timely addition as it diversifies these holdings by introducing an image of African-American male subjects. Finally, it joins two recent and major acquisitions of works by Kara Walker and Steve McQueen that directly address race and violence.