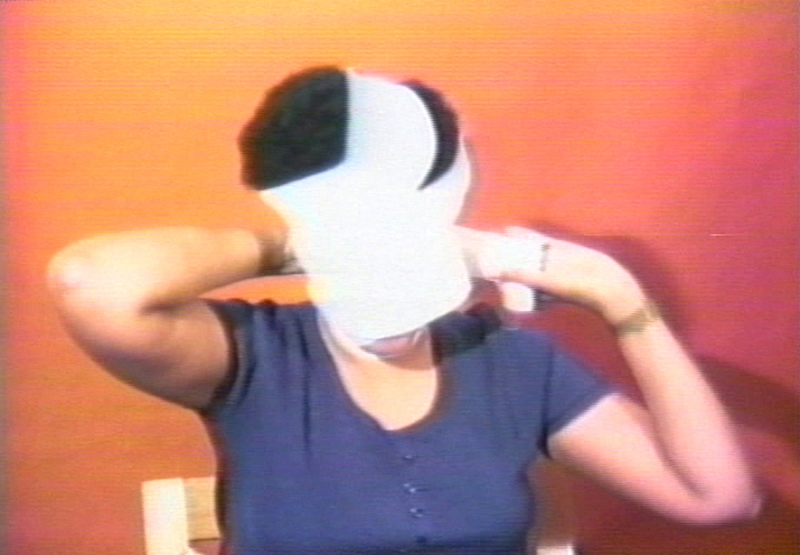 Howardena Pindell’s oeuvre spans several decades, and her processes of destruction, reconstruction, and seriality result in complex, textured, and layered works. After graduating from Yale in 1967 with an MFA, Pindell moved to New York, where she worked for twelve years in the Department of Prints and Illustrated Books at the Museum of Modern Art, a position she left after her efforts to combat institutional and structural racism continued to be discouraged. She is best known for her labor-intensive and colorful abstract paintings and works on paper, which incorporate unique materials such as glitter and hole-punched paper. Even in her more politically charged works, the artist sustains and extends her formal interests.

After a car accident in 1979, Pindell began exploring the social and political in her work, exemplified in this intensely personal and political artwork: Free, White and 21. Facing the video camera, she provides a deadpan account of the racism she has faced as a black woman in America while placing various materials on or over her face, such as wrapping gauze around her head—perhaps a comment on her accident or on being silenced. The subversive title references both the white woman the artist plays in the film (wearing a blonde wig and sunglasses) and a catchphrase often heard in Hollywood movies of the 1930s and ’40s that conveyed a proud assertion of one’s individual liberty (and white privilege). In her pioneering essay, “Art World Racism: A Documentation” (1989), the artist confronts the issues addressed in this film, exposing exclusionary practices of institutions, informed from her perspective as an art world insider as an employee at MoMA. Free, White and 21 was first shown in Dialectics of Isolation: An Exhibition of Third World Women Artists of the United States, curated by Ana Mendieta at New York’s A.I.R. Gallery in 1980, and was included in the Brooklyn Museum’s We Wanted a Revolution: Black Radical Women, 1965–85 on view at the ICA in summer 2018.

Enhancing the ICA’s collection of video works, Free, White and 21 brings a critical work by a significant artist into the collection. Furthermore, this work allows us to continue dialogues around representation and institutional racism from the past into the present.