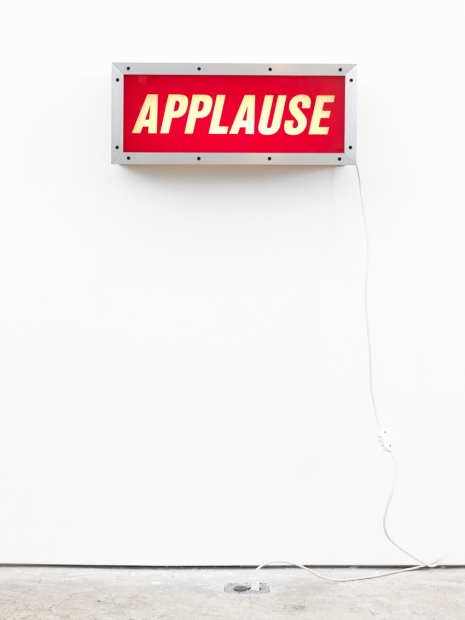 Jack Pierson is a multidisciplinary artist who addresses the tragedy and comedy of the struggle for public recognition and fame. Using photography, drawing, painting, installation, and sculpture, he engages symbols that communicate the folly and artifice of glamour. Often trafficking in clichés and hackneyed aphorisms, Pierson’s ironic oeuvre draws attention to both the fleeting nature of fame and the perception that one must die young and beautiful in its service. The artist is perhaps most recognized for his public “signs”—large-scale, brightly lit words such as “paradise,” “maybe,” or “lust” created from a hodgepodge of discarded building signage of varying typefaces and styles––that could equally be concrete poetry or ransom note.

The small sculptural work Applause is a re-creation of the sign used in television studios to direct audiences to clap at predetermined moments during tapings of a show. With the deadpan, satirizing gesture of transforming the mechanism into art, Pierson skewers the manipulation intended to heighten the secondary audience’s enjoyment. By editioning the re-created sign, he further vitiates its original on-site function and hence its meaning. The electric sign flashes on and off in a slow rhythm that mimics the pulsing adulation associated with the entertainment industry.

Applause enhances the ICA/Boston’s growing collection of conceptual sculpture, which includes works by Thomas Hirschhorn, Roy McMakin, and Damian Ortega. The work joins other sculptural work in dialogue with the forms and symbols of popular culture.