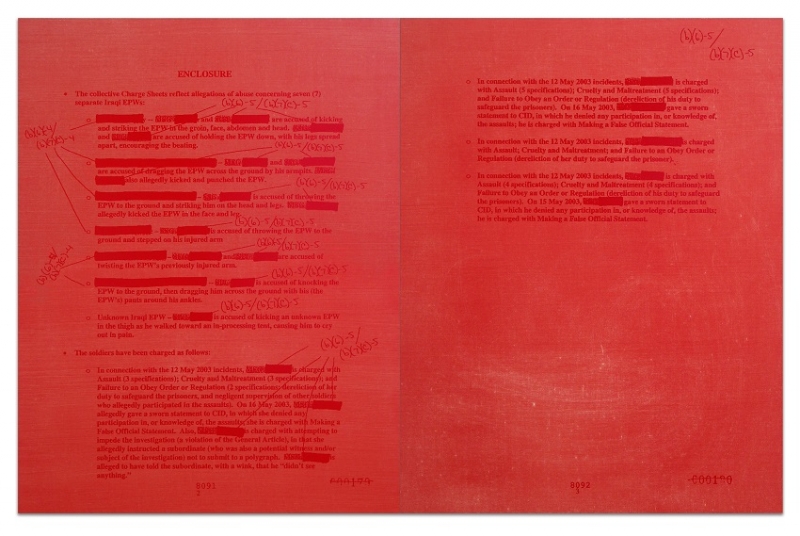 Jenny Holzer’s text-based works are rooted in conceptual art, semiotics, and feminism. Holzer emerged in the 1980s by harnessing the power of language in the public realm to interrogate such issues as violence, sex, and money. Rooted in conceptual art and feminism, Holzer’s artworks incorporate a wide range of statements, ideas, observations, and confessions, which she disseminates through media such as paintings, posters, benches, and electronic billboards. The identity of the speaker and the source and meaning of her works are rarely certain.

Enclosure (Deep Red) is one work in a series of paintings Holzer created for her Archive project, which drew on declassified documents obtained by George Washington University’s National Security Archive through the Freedom of Information Act. In detached and formal language, the document screen-printed on Enclosure outlines allegations against soldiers for incidents occurring during the Iraq War. Though we glean some of the gruesome details of maltreatment of prisoners of war—officers face multiple charges of “Cruelty and Maltreatment” and “Failure to Obey Order or Regulation”—all names and personal information are fully redacted and the outcomes withheld. By juxtaposing abstract painting with this authoritative and inaccessible document, Enclosure (Deep Red) creates a complex relationship between painting and politics.

This work joins a sculptural work by Holzer in the ICA/Boston’s collection and helps to convey the breadth of her prolific practice. It adds to the museum’s collection of painting and is in strong conversation with explicitly political works by artists such as Cady Noland and Kara Walker.

Gift of Alvin and Barbara Krakow 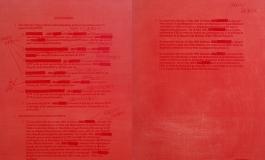