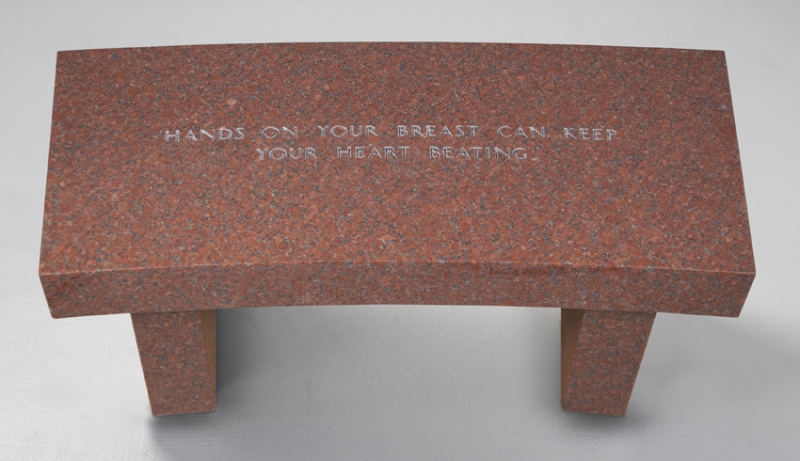 Hands on Your Breast Can Keep Your Heart Beating, from the series Survival

Jenny Holzer’s medium is words and ideas, and she uses a variety of vehicles—from stickers, posters, and T-shirts to benches, bronze plaques, electronic displays, and the Internet—to disseminate her piercingly incisive phrases in public spaces. Holzer incorporates strategies from mass media and advertising to interrogate the effects of rhetoric. Rooted in conceptual art, semiotics, and feminism, her text-based works engage spectators in fundamental questions: Who is speaking? Where does this text come from? What does it mean? Answers, however, remain productively elusive. Her texts—whether directives, confessions, or observations—tend to elide authorship, unlocking a sort of societal subconscious from which hacked-up bits of ideology, desire, fear, humor, and hatred pour forth. Like many other artists who came of age in the 1980s, Holzer addresses such issues as violence, war, sex, power, and money, harnessing the power of text and public space to do so.

​Reminiscent of memorial benches found in public parks, this small marble sculpture has been etched with the phrase “HANDS ON YOUR BREAST CAN KEEP YOUR HEART BEATING,” taken from Holzer’s the Survival Series, 1983–85. The marble bench—a form typically associated with classical statuary, gravestones, and tombs—lends a weighty permanence to its epitaph-like inscription. Enigmatic, the phrase suggests both a sexual advance and a patriotic gesture. Like much of Holzer’s work, the sculpture raises questions about the many forms of desire and how they might intersect with nationalism, sex, and consumerism.

​This bench from the Survival Series adds to the ICA/Boston collection of sculpture, especially those that engage with seriality by artists such as Tara Donovan, Sheila Hicks, Roni Horn, Charles LeDray, Josiah McElheny, and Andrew Witkin.