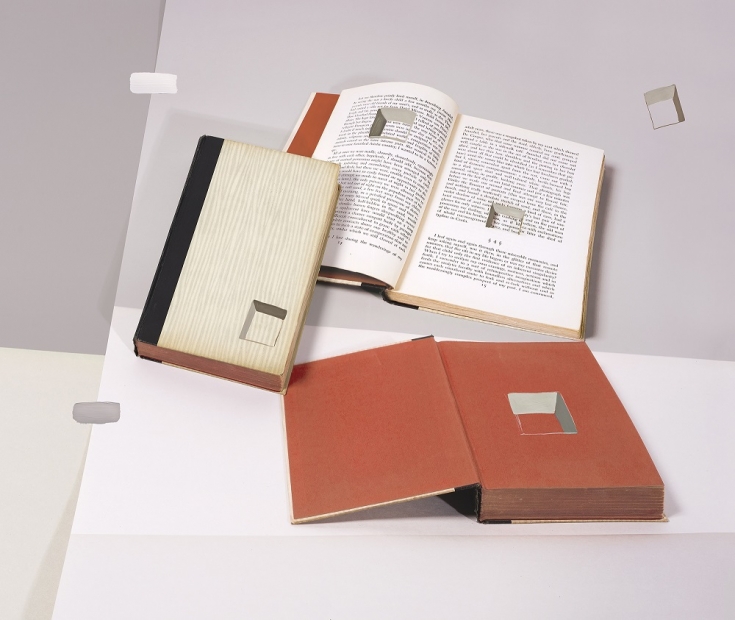 The work of John Houck explores the possibility of combining multiple perspectives in a single photographic image. Though they appear to be digitally altered, Houck’s photographs develop from a meticulous analog studio-based process of layering successive images to create powerful visual assemblages. Inspired by his training as an architect, Houck constructs small 3-D models or still-life arrangements that he then photographs: “A depiction of space, rather than an actual space,” as the artist has said. Houck frequently turns to objects and materials in his immediate surroundings. In the 2013 series A History of Graph Paper, he created images of items from his childhood that his parents had returned to him. He photographed different iterations of the artifacts by layering, adding, and subtracting materials to create compositions that evoke the complexity of memory in relation to the objects we collect.

Houck’s Petals and Interleaves depicts three books—two open and one closed—staged on a white and gray paper. Houck painted four cubic volumes on the books, which disrupt the perceived space of the photograph. The painted elements point emphatically to the flatness of the picture plane, with the volumes painted on the books appearing as holes, suggesting a playful sense of depth. This work was included in the solo exhibition Playing and Reality—its title taken from a book by British psychoanalyst D. W. Winnicott. Houck’s introduction of painted elements, sometimes as a layered part of the composition, other times directly on the surfaces of his prints, embodies a sense of playfulness modeled on Winnicott’s theories.

This photograph adds further depth to the ICA/Boston’s strong collection of studio-based photography made by contemporary artists such as Anne Collier, Liz Deschenes, Roe Ethridge, Leslie Hewitt, and Sara VanDerBeek.