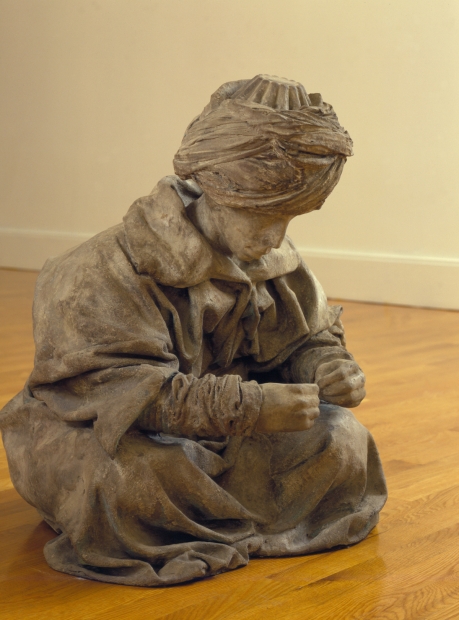 Portrait of a Turkish Man

Casting realistic, slightly under-life-size human figures in bronze, Spanish sculptor Juan Muñoz used classical figuration to create contemporary narratives. His lifelike renditions of figures such as dwarves, ballerinas, and half-human hybrids seem to catch the subjects mid-activity; their otherworldliness is heightened by the inclusion of subtle deformities such as blinded eyes or blurred faces. Muñoz was interested in the transitory moments when the viewer contrasts what is recognizable from what is foreign. He explained how this came about: “I don’t seem to be able to make a person that I know. Because of the ‘otherness’ of figures, I think they create a wide distance between the spectator and the object.”

During a four-week residency in 1995 at the Isabella Stewart Gardner Museum in Boston, Muñoz created a series of objects that respond to a work in the museum’s collection, the Gentile Bellini miniature Portrait of a Seated Turkish Scribe or Artist, 1478–80. Muñoz’s Portrait of a Turkish Man, a larger representation of the seated scribe, forms part of a speculative narrative developed from the drawing. Other works included in the Gardner exhibition Portrait of a Turkish Man Drawing were oil-stick drawings, photographs, and a sound installation that involved a stereo speaker floating in the Muddy River across the street from the museum. The speaker, visible from the second-story window of the Early Italian Room where Muñoz’s sculpture was installed, transmitted a disembodied Arabic-speaking voice, giving the open-mouthed sculpture a channel through which to communicate with visitors and deepening the mystery of the Turkish scribe.

Bound to the local history of contemporary art residencies and commissions, Portrait of a Turkish Man demonstrates the ICA/Boston’s commitment to artworks that bear particular meaning for Boston and the surrounding community. At the same time, the piece is tied into the museum’s collection of works that draw directly on earlier, canonical pieces. This sculpture is also particularly important in relation to the ICA’s collection of works that investigate the translation and meeting of identities and cultures across space and time, especially in the contemporary world.

Gift of Barbara Lee in honor of Jill Medvedow