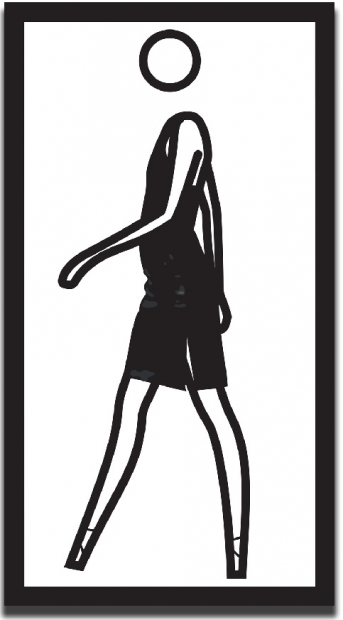 Julian Opie explores time-honored artistic subject matter, such as landscape, the figure, and portraiture, and renders these in contemporary media, including digitally enhanced drawing, photography, and animation, to impart an updated feel to these traditional subjects. In addition to exhibitions in galleries and museums, he has created dozens of projects for public and commercial settings, including airports, hospitals, shopping centers, and public parks. Opie has also collaborated with unusual partners for some projects, including the rock bands Blur and U2 and the Formula One race-car team.

Suzanne Walking in Leather Skirt is from a body of Julian Opie’s work that bears a close relationship to two works commissioned and exhibited through the ICA/Boston’s Vita Brevis program, a series of temporary outdoor art projects launched in 1998. In October 2005, the ICA unveiled two walking portraits by Opie on the Northern Avenue Bridge––Julian Walking and Suzanne Walking––which served as unofficial “ambassadors” for the new ICA building, located a short distance away. Suzanne Walking in Leather Skirt depicts a continuous computer animation of a stylized figure walking in an endless looped cycle. The highly simplified figure possesses a lyrical and lifelike movement, forming a jarring combination of the artificial and the natural.

The addition of this work introduces a new artist into the ICA’s collection and a new genre of moving-image work, one that complements Paul Chan’s animation work 1st Light while building on the museum’s strength in portraiture.

Gift of Kate and Chuck Brizius in honor of Barbara Krakow