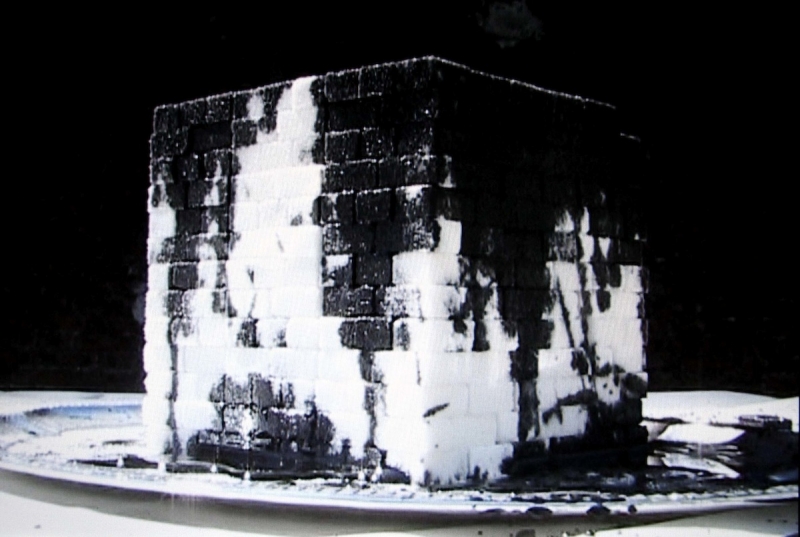 Creation through disintegration, presence through absence, fullness through emptiness—such paradoxes inspire the work of the French-Algerian artist Kader Attia. He succinctly describes his artistic aim: “I am interested in the evocation of something through its contrary.” To give form to the idea, he puts unexpected juxtapositions of contradictory elements to powerful visual and visceral effect.

Attia’s video Oil and Sugar #2 harnesses layered meanings through the marriage of simple and familiar materials, each selected for the distinct sensual/formal and cultural/political significations it embodies. His camera records in real time a close-up view of crystalline cubes of sugar stacked like bricks on a silver platter. Motor oil is poured onto the structure they form, and as the white solid absorbs the black liquid, it crumbles and pools in the platter as a glistening, viscous mass. Disintegrating the sweet, bite-sized sugar cubes with the crude fuel that powers so much of our contemporary activity, Attia presents a sensually seductive image of destruction, rife with open-ended metaphors in the realms of art, religion, and politics. He describes the form of the white cube as “the core symbol of art, of the space of art, of the institution.” Drenched in oil and rendered black, the structure evokes the Kaaba, the Islamic holy site circled by pilgrims on their annual Hajj to Mecca. Once dissolved by oil, it calls to mind the ongoing destruction and violence sparked by religious and political difference and competition for fossil fuel resources in the Middle East. Composed with contrasting color, texture, form, and temporal flow, Oil and Sugar #2 instills beauty in collapse, seduction in destruction, through means both direct and resonant.

First screened in Boston during the run of Attia’s 2007 ICA/Boston exhibition Momentum 9: Kader Attia, Oil and Sugar #2 shares conceptual and formal parallels with other works in the museum’s collection, including the slow-motion parable of Paul Chan’s digital animation 1st Light, 2005, and the paradoxical balance in Tara Donovan’s cube, Untitled (Pins), 2003.

Gift of James and Audrey Foster