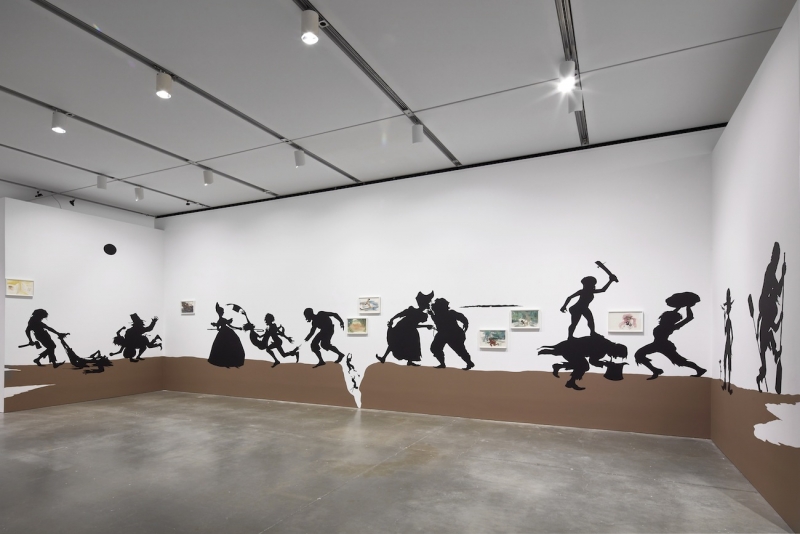 The Nigger Huck Finn Pursues Happiness Beyond the Narrow Constraints of Your Overdetermined Thesis on Freedom–Drawn and Quartered by Mister Kara Walkerberry, with Condolences to the Authors

Though she works in a variety of mediums, from painting and drawing to light-projection and video, Kara Walker is best known for her room-size tableaux of black cut-paper silhouettes. A visual language introduced at her New York debut at the Drawing Center in 1994, the silhouette has become Walker’s signature means of interrogating the highly fraught histories of slavery, racism, and gender discrimination in the United States.

The Nigger Huck Finn … was commissioned for the 2010 exhibition Huckleberry Finn at CCA Wattis Institute for Contemporary Art in San Francisco, the final in a trilogy of exhibitions based on canonical American novels. Huckleberry Finn revisits Mark Twain’s investigation of racial tensions in America through an extensive range of materials, including historical artifacts, documents, silent film footage, existing works, and fourteen new commissions that responded directly to the novel. Walker’s response is a sweeping cut-paper wall installation composed of silhouetted figures set on a light brown ground line painted directly on the wall, punctuated by seven framed gouaches. In preparing for the exhibition, Walker reread Adventures of Huckleberry Finn, coming away from it, as she has said, with “a better understanding of Huck, because he’s an abused child and a seeker of freedom.” Using this reading as a point of departure, The Nigger Huck Finn … depicts repeated Huck Finn–like characters—alongside caricatures of Jim and Pap, as well as Topsy from Uncle Tom’s Cabin—in a series of scenes adapted imaginatively by Walker to convey a heightened sense of violence and sexuality.

The Nigger Huck Finn … is unusual within Walker’s body of work, as it combines cut-paper silhouettes, wall paint, and framed works on paper, making it a major addition to the ICA/Boston’s collection. It joins works by Kerry James Marshall and Lorna Simpson that also engage with the complex and pressing issues of race and identity through the distinctive vision of contemporary art.