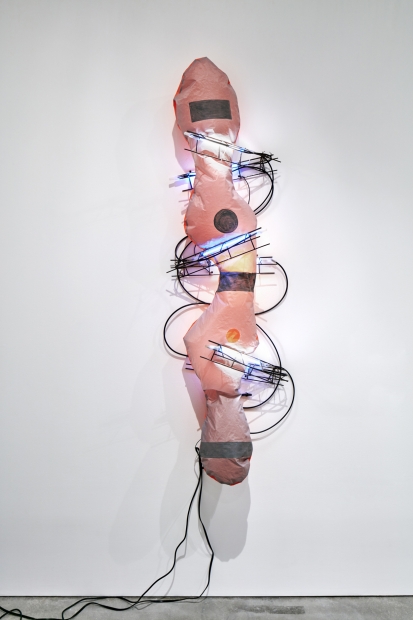 Keith Sonnier’s work debuted in Lucy Lippard’s famous 1966 exhibition Eccentric Abstraction, a pointed response to the end-game strategies of minimalist sculpture. Minimalism’s geometric, machine-made, and unified forms were countered by Sonnier and other so-called postminimalist artists working in downtown New York in the late 1960s—including Eva Hesse, Barry Le Va, Richard Tuttle, and Jackie Winsor—with diffuse forms, a process-oriented approach, and performative elements. Though Sonnier studied painting, early on he moved into three dimensions, the use of neon, and the integration of movement in the form of video art and performance.

Depose II is one of Sonnier’s rare inflatable sculptures. Using the unlikely combination of neon lighting, metal, and nylon sailcloth, Sonnier balances a readymade aesthetic with painted geometric elements. The metal forms that pinch the inflatable are based on extruded found material, such as the rebar commonly used to build cement structures. The gestural neon shapes derive from the artist’s drawings. The inflatable assumes an anthropomorphic form that, when filled with air from the blower, suggests a living being. Initially a limp sack, the sculpture must breathe and expand to assume its final form. The title references the act of being deposed, wherein a person is required to give oral out-of-court testimony. The person being deposed is often asked exceedingly personal questions. Perhaps the pinched or pressed inflatable alludes to the feeling of duress that might arise from having to tell the truth in a compromising situation.

Depose II is the first work by Sonnier to enter the ICA/Boston collection. It is a unique postminimalist sculpture that integrates fabric, a medium the ICA collects and exhibits in depth. It joins a number of important sculptures made of repurposed materials by such artists as Tara Donovan and Rachel Harrison.