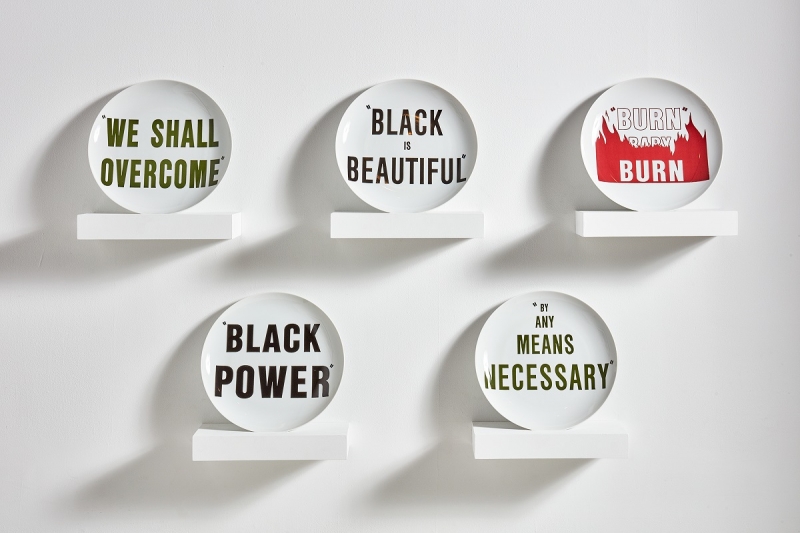 At age eight, Kerry James Marshall moved with his family from Birmingham to the neighborhood of Watts in South Central Los Angeles. The environment of his upbringing had a profound impact on the subject matter of his work, which revisits the legacy of the Civil Rights era and the nation’s progress—or lack of progress—toward the goal of racial equality. As Marshall has stated: “You can’t be born in Birmingham, Alabama, in 1955 and grow up in South Central near the Black Panthers headquarters, and not feel like you’ve got some kind of social responsibility. You can’t move to Watts in 1963 and not speak about it. That determined a lot of where my work was going to go.”

The five dinner plates in this set feature the texts “We Shall Overcome,” “Burn Baby Burn,” “By Any Means Necessary,” “Black Is Beautiful,” and “Black Power,” taken from a print series shown in Mementos, a 1998 solo exhibition of Marshall’s work organized by the Renaissance Society in Chicago, which traveled to the ICA/Boston, among other venues. The ceramic plates were produced as an edition to benefit the Renaissance Society. The affirmations they present are slogans popular during the 1960s Civil Rights movement, and they range in tone from peaceful to aggressive, reflecting the plurality of stances taken in the fight for equality in that era. In discussing the prints in his essay for the Mementos exhibition brochure, curator Hamza Walker considers them elegiacally, as “fallen monuments, tombstones even, to popular slogans which have lost their ability to galvanize the black community.” On benign, domestic plates, their revolutionary impact is perhaps further softened.

This edition, which was included in the 1999 ICA exhibition Collectors Collect Contemporary: 1990–99, builds on the museum’s interest in craft media, while introducing into the collection the work of an important contemporary practitioner, teacher, and voice.

Gift of The Dale A. Roberts Collection