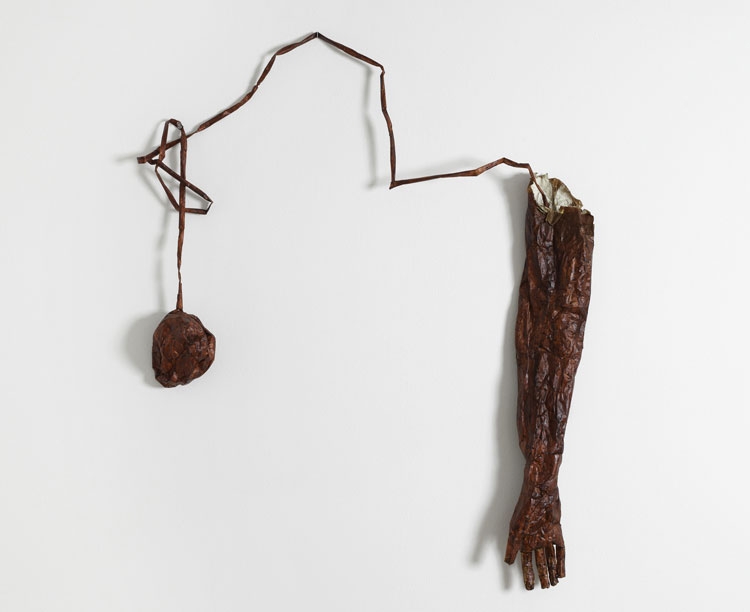 From Heart to Hand

Kiki Smith has created a visceral oeuvre that positions the body as a site where history, identity, psychology, politics, and experience coalesce. Using a wide variety of organic materials and techniques, she often creates a dialogue between animal forms and fundamental human experience. Smith’s life-size figurative sculptures, frequently cast from live models, draw attention to human mortality by way of the systems (reproductive, excretory, vascular) whose vitality and decay are linked to life and death. While informed by the politics surrounding the AIDS epidemic, Smith’s practice also concerns feminist identity politics, as evidenced by her frequent use of the female form and reproductive system.

Throughout her oeuvre, Smith has often invoked bodily fluids, most notably blood and semen, to draw attention to the raw physicality as well as psychological pain, of human existence. The delicate paper sculpture Heart to Hand is an early work in which Smith externalizes internal processes, both psychic and physical. Red ink on gampi paper is manipulated to resemble wrinkled and bloodied viscera. The disembodied titular hand and heart hang freely on the wall, connected via a spindly red umbilical artery. While the sculpture makes self-referential allusion to channels of artistic creation, it also references Bruce Nauman’s From Hand to Mouth—a similar sculpture of a human arm and mouth that likewise seeks to represent the psychological divide between the manifest and the metaphoric.

The addition of From Heart to Hand broadens the reach of the ICA/Boston’s collection in several important ways: it adds to the growing numbers of sculptures produced by women, the cadre of works in dialogue with feminism and the female body, and, most specifically, to the genre of psychologically charged objects such as those by Louise Bourgeois, Tara Donovan, and Mona Hatoum.