Kiki Smith positions the body as a site where history, identity, psychology, politics, and experience coalesce. Her visceral oeuvre, manifested in a variety of organic materials and techniques, often creates a dialogue between animal forms and the disturbing aspects of human experience. Life-size figurative sculptures, frequently cast from live models, draw attention to human mortality by way of the systems (reproductive, excretory, vascular) responsible for sustaining life. Smith’s practice is informed by the bodily politics associated with the AIDS epidemic, yet her work is also closely associated with feminist identity politics, a connection that is often made due to her frequent use of the female form and reproductive system.

​Smith’s Untitled (Breast Jar) traffics in the psychologically charged potential of the uncanny. The beaker-like jar recalls both scientific and medical inquiry, sterility, and experimentation. However, the presence of the contour of a breast in the bottom of the blown-glass jar introduces an association with female sexuality and challenges the hard and clinical nature of the device. The breast juts into the negative space of the volume from which water is poured when the sculpture is displayed. Smith often draws attention to the liquids associated with bodily functions. In the case of the Untitled (Breast Jar), she inverts the relationship of interior and exterior, submerging in liquid an empty breast, itself usually the generator and dispenser of liquid.

​The addition of Untitled (Breast Jar) broadens the ICA/Boston’s growing collection of sculptures that are produced by women, that are in dialogue with feminism and the female body, and that represent, more specifically, the genre of psychologically charged, seemingly ready-made objects, such as the work of Louise Bourgeois, Tara Donovan, and Mona Hatoum. 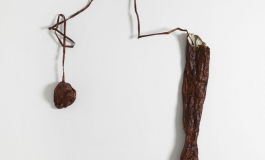 From Heart to Hand