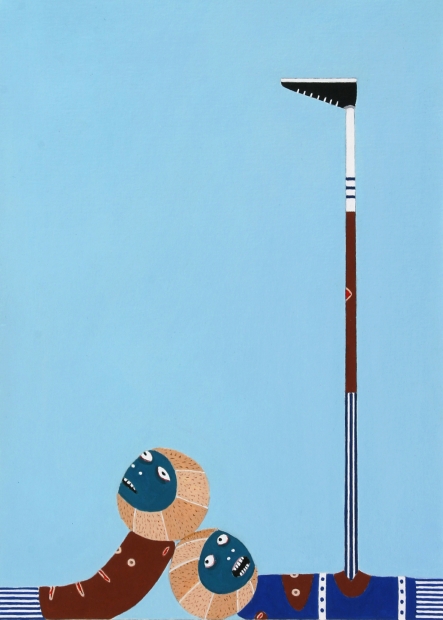 Known for her singular body of small-scale paintings on paper, Massachusetts-based Laylah Ali often positions her subjects in odd poses, engaging with one another in curious ways. Her longest-running and best-known series depicts brown-skinned, gender-neutral human beings she calls Greenheads.

While reminiscent of the Greenheads, the figures in Untitled display new levels of detail and pattern. The scene is ambiguous and confounding. Framed by Ali’s signature sky-blue background, two figures lie at the bottom of the image, leaning against each other. As is characteristic of her oeuvre, the scene is one of implied violence; though we do not see the act itself, we witness its brutal aftermath. Yet, rendered in Ali’s cartoonlike style, the scene is simultaneously infused with absurdist humor. The figures, in matching striped pants, have no arms. Their flesh-colored heads suggest a helmet, hat, or bandage … or maybe have they been scalped? The mid-section of the figure on the left is covered with cuts or scars. A long, thin leg that rises from the stomach of the right-hand figure resembles an SOS flag.

Joining another work by Ali in the ICA/Boston collection, this powerful image provokes intense reflection and emotion. An excellent introduction to the artist’s distinctive style, the gouache builds the museum’s nascent collection of works on paper, which includes examples by such artists as Ambreen Butt and Yayoi Kusama.

Gift of Tristin and Martin Mannion