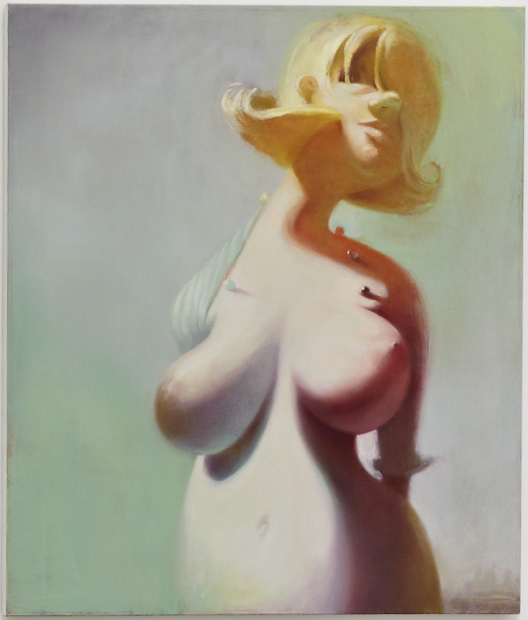 Lisa Yuskavage paints hyper-sexualized images of women, assigning them poses that seem to be taken from pornography and giving them traditionally desirable qualities such as large breasts. Yet she undermines the usual relationship between pornographic subject and object by distorting aspects of the figures’ bodies in bizarre and unappealing ways. A figure might have an exaggerated belly, an oddly shaped backside, or any number of other malformations. This results in images that are at once tantalizing and revolting. By mirroring, but also disrupting, the ways in which women are presented in our culture, she calls attention to the misogyny with which the female figure is habitually treated.

​​Motherfucking Rock epitomizes this operation of both eroticizing and warping the female body. Yuskavage depicts the head and torso of a female figure, who peers through her blond bangs. The figure’s gigantic breasts point upward in an idealized fashion. The lower part of her torso, however, is unidealized, its rounded, uneven form reminiscent of an eggplant. The artist also attaches a number of spheres on the figure’s upper torso, decreasing its appeal further still. The seductive and the repellent combine in the painting to a confusing, almost humorous effect.

​Motherfucking Rock adds to the ICA/Boston’s recently expanding collection of paintings. This work was included in the ICA’s exhibition Expanding the Field of Painting, an exploration of the ways in which painting has been transformed since the 1970s. It joins works by Louise Bourgeios, Ambreen Butt, and Cindy Sherman that examine and undermine art-historical representations of women.