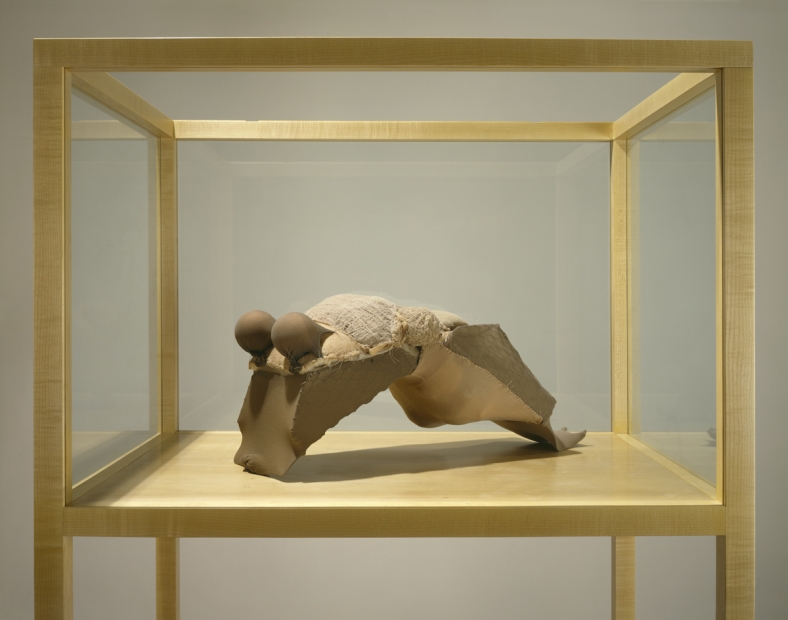 Louise Bourgeois was one of the most influential artists of the last century. In her distinctive mix of abstraction and figuration, she delved into childhood memories and the struggles of everyday life. Using a variety of materials—wood, bronze, marble, steel, rubber, and fabric—she crafted evocative and personally cathartic objects that reference the body, sexuality, family, trauma, and anxiety.

Beginning in the mid-1990s, Bourgeois repurposed found fabric as the material for a number of sculptures. In part, this stemmed from necessity—sewing was a technique she could still manage as an elderly artist. Stitching with bits of her old clothing, sheets, or towels, Bourgeois created small figures that convey strong emotions. Arched Figure No.1 is made from pantyhose-like fabric stretched over chicken wire. This crudely stitched female form could be in a state of sexual ecstasy or perhaps, conversely, excruciating pain. Bourgeois describes this arched form, which appears in many of her works, as “the arch of hysteria, pleasure, and pain … merged in a state of happiness.” Placed in a vitrine of the artist’s design, Arched Figure No. 1 calls to mind anthropological or historical museum display. Like a contemporary version of an ancient fertility figure, the object is preserved and protected for future contemplation.

Arched Figure No. 1 demonstrates the artist’s characteristic interest in subjects such as the body, sexuality, and androgyny. The piece was featured in the ICA/Boston’s 2007 exhibition Bourgeois in Boston.