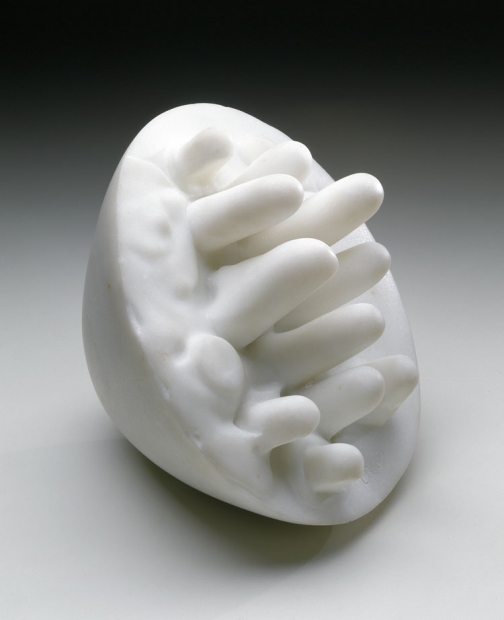 During her seventy-year career, Louise Bourgeois became an artist of wide influence and art-historical importance. Her charged work, a distinctive mix of abstraction and figuration, delves into childhood memories and the emotional struggles of everyday life. Working in wood, bronze, marble, steel, rubber, and fabric, she created powerful objects that reference the body, sexuality, trauma, and anxiety.

Among the motifs that appear most regularly in her work are breasts and penises. This imagery is often discussed from an autobiographical standpoint, as standing in for Bourgeois’s mother and father, with whom she had complicated relationships. Her use of the motifs can also be related to human sexuality more generally. Additionally, her objects have been compared to ancient religious icons. In Germinal, a small and domed sculpture in white marble, Bourgeois collapses the imagery of the breast and the penis. According to Bourgeois, as quoted in Thomas McEvilley’s Sculpture in the Age of Doubt, “Sometimes I am totally concerned with female shapes—clusters of breasts like clouds—but I often merge the imagery—phallic breasts, male and female, active and passive.” The “phallic breast” has an early precedent in sculptures and depictions of the goddess Rati in Bali, whose long breasts jut forward as though erect. Germinal stands as an archetypal example of Bourgeois’s manipulations and combinations of male and female sexual markers.

As part of a group of works by Bourgeois owned by the ICA, Germinal augments the museum’s collection of sculpture by significant female artists.