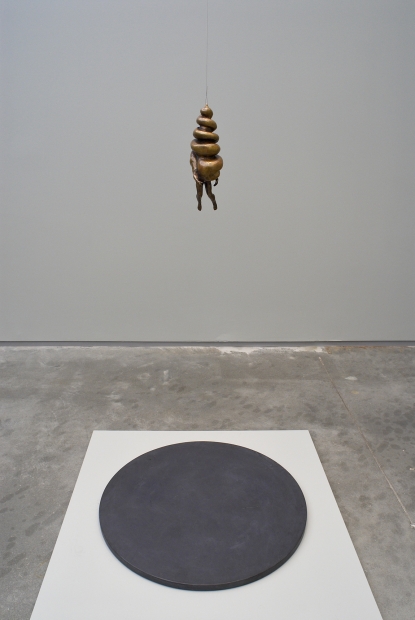 A renowned artist of the twentieth century who has had lasting influence, Louise Bourgeois is best known for her sculptural work. Influenced by surrealism and the work of émigré artists fleeing Europe during World War II, Bourgeois engaged a wide array of tactics—from enlargement to suspension and assemblage—to probe the human condition: its pain, fragility, violence, eroticism, and complexity.

In the early 1950s, Bourgeois began her series of spiral woman sculptures—swirling and suspended humanoid forms. In Spiral Woman, 1951–52, Bourgeois explores the abstract form and dynamism of the spiral by stacking blocks of wood on a steel rod. The spiral becomes rounded in Spiral Woman, 1984, implying flesh and folds, from which arms and legs protrude. Suspended by a cable from the ceiling, the sculpture resembles a corpse spinning on the axis of its demise.

Since introducing Bourgeois to Boston audiences in a 1953 group exhibition, the ICA/Boston has featured her work in a number of exhibitions, including the major 2007–08 solo show Bourgeois in Boston. These sculptures join the ICA’s rich collection of work by Louise Bourgeois and add to holdings of figurative sculptures by such artists as Rachel Harrison, Juan Muñoz, and Kiki Smith.