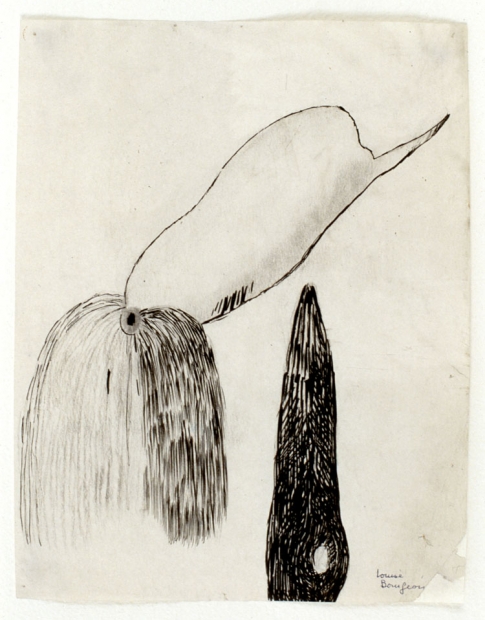 Louise Bourgeois utilized a variety of materials—fabric, wood, metal, wax—to craft personal and evocative objects that reference the body, sexuality, anxiety, and trauma. Deeply affected by her childhood experiences, Bourgeois saw art as a way of processing complex feelings. She found sculpture to be particularly helpful, once claiming that it “needs so much physical involvement that you can rid yourself of your demons through sculpting.” Drawing had another, equally important function in her life and work. She had developed her drafting skills as a youth while helping her tapestry-restorer parents by making drawings for them to follow in their repairs. Conceiving of drawings as a “kind of diary,” Bourgeois drew consistently, almost daily, throughout her long life. Because she could execute her drawings quickly, they were an effective way of recording her artistic ideas.

Bourgeois’s drawings often seem like automatic notations—quick sketches of a memory or an idea for a future sculpture. Only a small percentage can be considered preparatory to specific sculptures; she generally recorded only individual motifs that might later be translated into sculptural form. The long, thin shape in the right foreground of Untitled, for example, finds parallels in many other drawings, as well as in bronze and wooden sculptures she created in the late 1940s. The hairlike forms in the left foreground, which recur throughout Bourgeois’s oeuvre, are usually confined to drawings and prints. Though abstract, these forms bear a strong resemblance to parts of the body.

Bourgeois is one of the most significant female artists of the twentieth century. Drawings constitute a key and sometimes overlooked aspect of her practice, making Untitled an important part of the ICA/Boston’s holdings of her work.