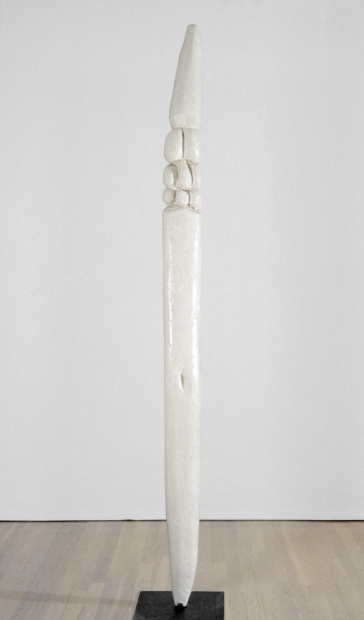 Sculptor, feminist, and influential artist Louise Bourgeois has produced a distinctive oeuvre over her seventy-year career, combining abstraction and figuration and a wide array of media to explore such themes as the body, trauma, and sexuality.

One of several major sculptures by Bourgeois in the ICA/Boston collection, Untitled is one of the artist’s early carved and painted-wood totemic sculptures, which she refers to as “personages.” Starkly vertical, thin, and luminescent, Untitled is an abstract, almost tusklike form that suggests the fragility of the upright human figure. The influence of the surrealists on Bourgeois is apparent in this work, in which the tension between the familiar and unfamiliar becomes paramount as the figurative adopts a new form.

Since introducing Bourgeois to Boston audiences in a 1953 group exhibition, the ICA has featured her work in a number of exhibitions, including the major 2007–08 solo show Bourgeois in Boston. This work joins the ICA’s rich collection of sculptures by Bourgeois and adds to the holdings of figurative sculptures by such artists as Rachel Harrison, Juan Muñoz, and Kiki Smith.