Luther Price is known for his work with Super-8 and 16mm film, particularly for constructing films out of discarded prints of documentaries, snippets of Hollywood features, and other fragments of cinema. He frequently physically manipulates this found footage by scratching, distressing, and painting the film surface, or even by burying it in the earth so that natural processes such as rotting and mold growth begin to change the film. In recent years, Price has begun to experiment with handmade slides. Again, he begins with found film that he painstakingly cuts up, reassembles, and alters. He also sandwiches detritus and found materials––from insects to dirt, dust, and glue––between two glass plates and then projects the resulting image onto the gallery wall. Through his reuse of analogue photographic materials, Price produces beautiful, abstracted images connected to histories of appropriation, abstraction, and experimental film.

Light Fracture is one of two slide works Price made in 2013 that are now held by the ICA/Boston (the other being Number 9, acquired from that year’s Foster Prize exhibition at the museum). Using slide projectors, he presents the handmade slides as a cycle of moving still images, an arrangement that connects his work to animation and early cinematic tropes. The individual images vary dramatically—from the microscopic to the macroscopic, from silhouettes of monstrous insects to beautiful abstract patterns, from dark earthy tones to brilliant reds and oranges—but taken as a whole, the series consistently captures light as it is projected, refracted, and splintered through the materials. The result is a visually arresting experience that evokes entropy, mortality, and otherworldly visions.

This piece contributes to the ICA/Boston’s ongoing support of Boston artists, joining works by artists such as Taylor Davis, Kelly Sherman, and others. Additionally, it makes a strong addition to the collection by broadening the conversation around painterly abstraction in photography and film by artists such as Kader Attia, Noriko Furunishi, and Pipilotti Rist. 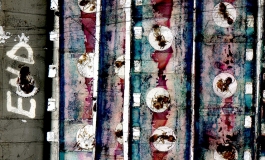