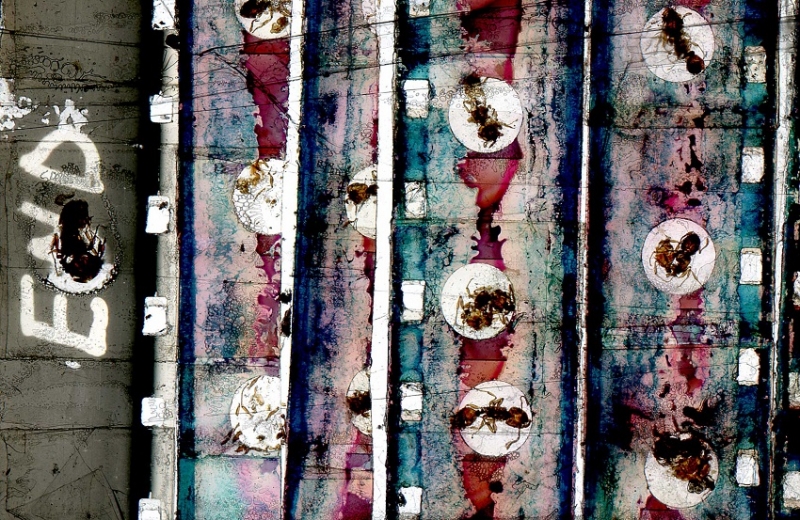 Luther Price is Boston-based filmmaker and video artist who constructs his pieces by using found footage drawn from a vast array of sources, including documentaries, pornography, and Hollywood features. His practice involves physically manipulating film, exposing the medium to extreme conditions by scratching, painting, and distressing the surface, or even burying it underground to collect dust, insects, and mold.

In Number 9, the artist produced four hundred slides projected by five carrousels in an evenly spaced row and simultaneously looped, an arrangement that connects his work with animation and early cinema. For each slide, Price has combined recycled imagery with film he has shot himself and overlaid this visual imagery with hair, ink, and organic materials. He exposed the film to conditions so that it would rot and develop mold to distort and abstract the imagery. The individual slides vary vastly from silhouettes of monstrous insects to abstract patterns, from earthy tones to brilliant reds and oranges, resulting in a visually arresting experience. The artist has said about this work: “With Number 9, I feel I move to a visceral context very familiar to me in an autobiographical sense. I have a physical background in sculpture. So this work in particular is very 3-D.”

Number 9 was exhibited in the ICA/Boston’s 2013 Foster Prize exhibition and this piece contributes to the museum’s ongoing support of Boston artists, joining works by artists such as Taylor Davis, Kelly Sherman, and Andrew Witkin, among others. A strong addition to the collection, it broadens the conversation around painterly abstraction in photography and film by artists such as Kader Attia, Noriko Furunishi, and Pipilotti Rist.

Acquired through the generosity of Paul and Catherine Buttenwieser, The Corkin Family, Fotene Demoulas and Tom Coté, James and Audrey Foster, Jodi and Hal Hess, and Tristin and Martin Mannion