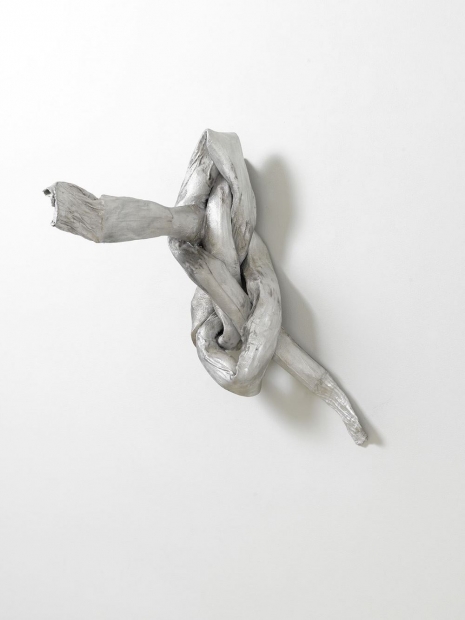 Lynda Benglis came of age as an artist in New York in the 1960s, and her work was closely associated with both process art and minimalism. She is best known for pouring industrial materials such as latex and foam—often directly onto the floor, echoing Jackson Pollock’s style of painting—to compose abstract, biomorphic forms. An important feminist icon, Benglis expanded the purview of minimalism, a genre dominated by male artists, by experimenting with color and form and engaging explicitly with the body.

In the 1970s, Benglis created a series of metalized knot structures from materials such as wire mesh and aluminum. Hung on a wall, they appear to hover in space. Robert Pincus-Witten, an editor at Artforum, described the artist’s work as “frozen gestures,” exemplified in this 1974 work Sierra. Paula Cooper Gallery presented these knot works in 1974, the same year Benglis took out the infamous Artforum ad picturing her nude and holding a dildo in front of her genitals as a comment on the male-dominated art world. Implicating her own body in these works, she makes the process of knotting visible, while the structure resembles twisted arms, internal organs, or entwined bodies. Sierra demonstrates Benglis’s unique and expansive approach to sculpture and the ways it can reference the body and bodily experience through abstraction.

Sierra bolsters the Barbara Lee Collection of Art by Women and adds a seminal woman artist who is not yet represented in the museum’s collection. This hallmark work, the twin of which is in the permanent collection of the Museum of Modern Art, New York, joins major sculptures by Louise Bourgeois, Eva Hesse, Cady Noland, and Faith Wilding. Benglis’s exploration of the body is in conversation with works by Bourgeois, Ana Mendieta, Kiki Smith, and Nancy Spero. Her early use of industrial materials creates an interesting dialogue with the work of younger artists such as Tara Donovan and Rachel Harrison. The acquisition of this work allows the ICA/Boston to tell a fuller story of twentieth-century feminist art.

Acquired through the generosity of Fotene Demoulas and Barbara Lee, The Barbara Lee Collection of Art by Women