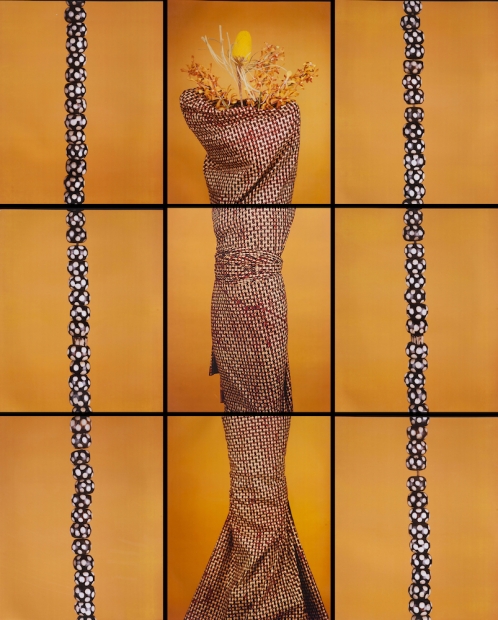 María Magdalena Campos-Pons’s wide-ranging works in photography, performance, painting, sculpture, and moving images investigate how aspects of history, memory, gender, and religion give shape to identity. Born in Cuba and raised on a sugar plantation in a family with Nigerian, Hispanic, and Chinese roots, Campos-Pons evokes narratives of the transatlantic slave trade, indigo and sugar plantations, Catholic and Santeria religious practices, and revolutionary uprisings in her poetic, often autobiographical works.

Campos-Pons says her work aims to “claim space for women’s issues, collecting and telling stories of forgotten people, in order to foster a dialogue to better understand and propose a poetic, compassionate reading of our time.” Among the artist’s most recognizable bodies of work are grids of large format Polaroid photographs of a variety of subjects that dynamically marry photography and performance. Classic Creole is a grid of nine photographs depicting a totemic body wrapped head-to-toe in a form-fitting, patterned fabric. Topped by a colorful bouquet of yellow and orange flowers, the body is concealed entirely and given shape only by the silhouette of the garment and the suggestion of body parts beneath. Set against a bright orange background and flanked by twin columns, the body enlivens the garment even as it is contained by it. The work’s title references Creole people, racially mixed ethnic groups categorized as such in the colonial era. Rather than give a face to a “classic Creole,” Campos-Pons allows for the fluidity of such identification by representing a body abstracted through framing, dress, and patterning.

Acquired through the generosity of Jodi and Hal Hess