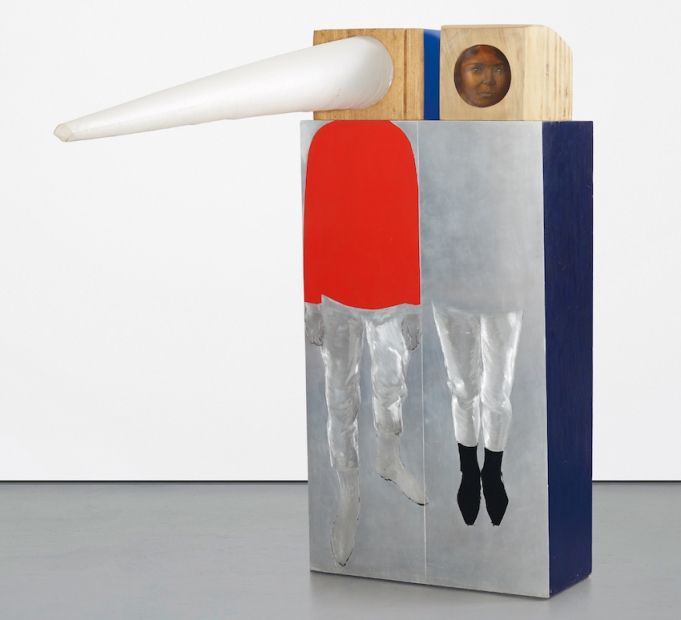 The figurative sculptures of Marisol (born Marisol Escobar) are as distinctive as they are visually eclectic and psychologically probing. Marisol combines many influences and materials in her work, from the angular and rough forms of folk art and pre-Columbian art to the distortions of cubism and the color of pop art, the movement with which she is most closely associated.

First exhibited in Marisol’s 1966 exhibition at Sidney Janis Gallery in New York, Couple No. 1 presents a pair of illustrated figures contained within a wooden block. The bright crimson top and the white fabric cone, which extends six feet into space with the help of a motor, distinguishes the figure on the left from the more spectral, carefully rendered, and feminine figure on the right. Shaded three-dimensional elements contrast with two-dimensional blocks of color, and the white-cone face contrasts with the more detailed face beside it, suggesting the duality of anonymity and individualization embodied not only by two people, and two genders, as the title might imply, but also by any single person. With remarkably minimal means, Marisol communicates an element of pathos in her rendering of the couple, which speaks to her skill and insight in representing the human condition.

This work is one among a number of figurative sculptures in the ICA/Boston collection, including works by Rachel Harrison, Juan Muñoz, and Kiki Smith. Couple No. 1 also reflects the ICA’s commitment to women artists and to figures who may have been historically under-recognized.