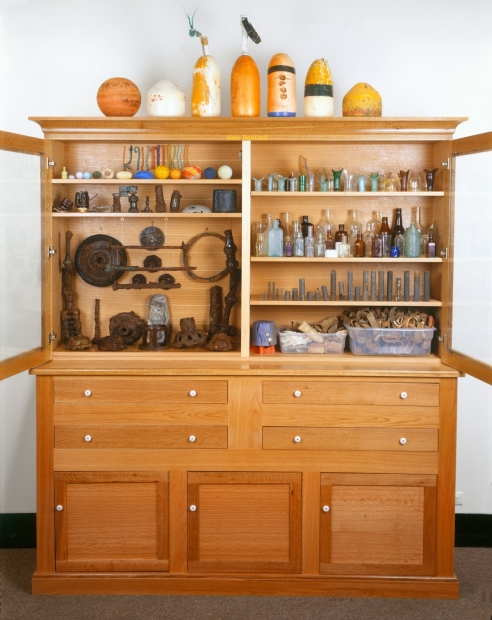 Since the early 1990s, Mark Dion has pioneered a unique, interdisciplinary practice by shadowing and appropriating scientific methodologies. He has traveled the world to collect plant and animal specimens, conducted archeological digs, and rummaged through forgotten collections, presenting his finds as charismatic sculptures and curiosity cabinets brimming with objects.

New Bedford Cabinet is a large wooden cabinet of the classic Wunderkammer variety and comes from Dion’s New England Digs project, organized by the Fuller Art Museum in Brockton, Massachusetts. The beautiful cabinet displays hundreds of objects found during an archeological dig led by the artist in New Bedford, Massachusetts, which also happens to be the artist’s hometown. Dion has often said that the origin of his interest in collections and display came from combing the beaches of New England as a child, so this connection to the artist’s biography gives this work a special place in his expansive oeuvre. For New England Digs, Dion conducted digs in Brockton; Providence, Rhode Island; and New Bedford, collecting, cleaning, categorizing, and presenting his finds in handmade wooden cabinets. New Bedford Cabinet is exemplary of Dion’s practice, both his application of scientific approaches and his focus on display techniques to question forms of knowledge and practices of collecting. His intermingling of old and modern objects without attention to hierarchy reflects his own fictive version of history and perhaps encourages viewers to question contemporary institutions and popular ideologies that define today’s official narratives.

This large-scale sculpture is a major addition to the ICA/Boston’s collection by one of Massachusetts’s most celebrated artists. The ICA presented Dion’s first U.S. survey in October 2017, and this is an important marker of the museum’s exhibition history while also capturing the artist’s distinctive use of methods from the sciences and historical display techniques. New Bedford Cabinet joins significant sculptures by Tara Donovan, Rachel Harrison, and Sarah Sze that similarly make use of found and everyday objects to create compelling and memorable artworks.