German Witch is a characteristic example of Dumas’s large-scale watercolors, rendered with a finely modulated monochromatic wash and additional tonal accents. The effect is both fluid and sensuous, recalling something of the fleshy nudes of her Flemish forebear Peter Paul Rubens. As befits a witch, the image has its mysterious side. The figure turns to look over her shoulder, yet we do not know what she sees. At the same time, our attention is drawn to the stick protruding from her behind: how, we might wonder, will such a tiny broomstick keep such an ample witch aloft?

In 2001, Dumas had a memorable exhibition at the ICA/Boston, and with this history in mind, the ICA has acquired a number of her major works. German Witch joins the ICA’s important collection of art made by women, enriching the museum’s strength in figurative works and expanding the holdings with a major work on paper. 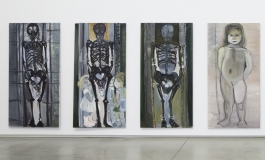