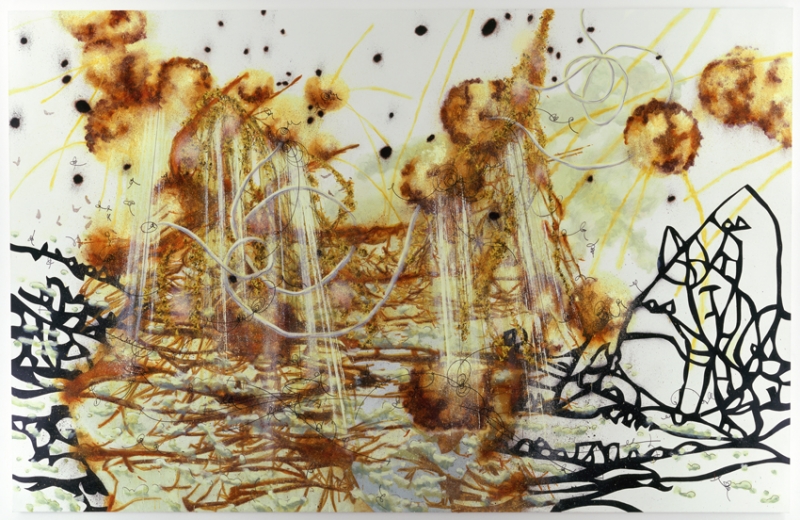 Invested in the transformation of a vast information network into objects, Matthew Ritchie makes paintings, sculpture, lenticular light boxes, short fiction, interactive games, animated video, and expansive wall drawings. Ritchie’s omnivorous approach to comprehending and visualizing information offers unorthodox ways to explore such ideas as the laws of thermodynamics, Judeo–Christian religion, string theory, Gnostic principles, Einstein’s general theory of relativity, quantum physics, Mayan cosmology, gambling odds, and ceremonial magic. All of these are universal systems—or systems that purport to be so. For Ritchie, the system also describes a way of making art, and specifically, a way to work representationally without figuration.

The Salt Pit is an abstract composition that incorporates freehand drawing and layered mark making to depict a world in ceaseless flux. It evokes the vastness of the universe and our efforts to rationalize, fictionalize, or understand the matter that exists beyond the limits of our perception. Ritchie typically favors a kind of Gesamtkunstwerk (whereby various art forms are synthesized into a new and complete work of art), and in which multiple paintings hung together often extend beyond the canvas onto the gallery wall to form an immersive installation. He regards painting not so much as a construction of space than as a continuous flow of slowed-down information—multiple threads that seemingly interrupt one another, or threaten to cancel each other out, or both. These strands mimic both the blow and upheavals of the universe and the map of neurons racing through the human brain—not to mention the starts, stops, and false starts that twist through the process of painting.

Alongside the work of other artists in the museum’s collection, such as Josiah McElheny, Tara Donovan, and even works by Swoon and Shepard Fairey, The Salt Pit contributes to the ways in which contemporary artists are navigating the boundaries between a variety of fields (i.e, astronomy, science, art, and literature), while also expanding beyond the canvas and onto the gallery wall.