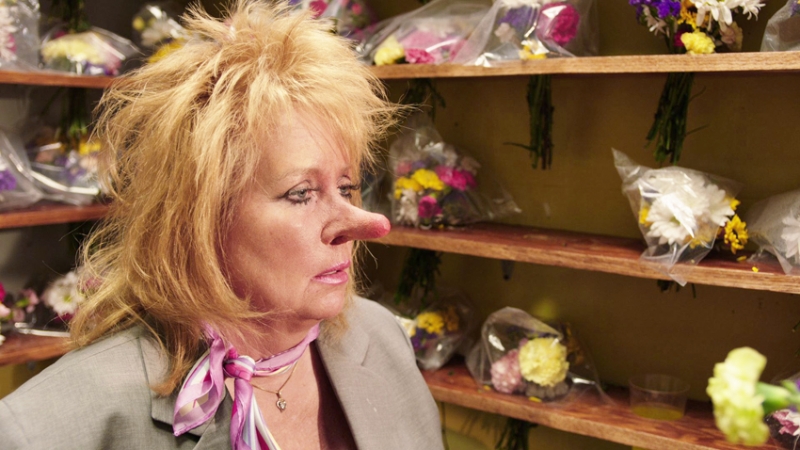 In her absurdist films, Mika Rottenberg views the systems of capital through the lens of the offbeat, the exaggerated, and the gaudy. Her vision combines a penchant for the visceral, be it expressed through languid foodstuffs or bodily emanations, with a desire to express the physical realities of labor and the vexed systems by which goods are produced.

In 2014, Rottenberg travelled to the Zhuji, China, to witness the harvesting of cultured pearls––a laborious, repetitious, and undoubtedly alienating process that belies the vision of luxury, natural beauty, and ease that they evoke. NoNoseKnows provides a documentary-like account of the process, highlighting the bleak industrial urban landscapes that have resulted from the effects of the growing pearl trade in the region. The film documents the pearl production process in its entirety: irritants are inserted into young oysters to coax them into producing the pearls that later in the film are harvested by a woman crouching in a dimly lit room: she digs a sharp knife into the plate-sized mature oysters to extract a steady stream of pearls from their viscous pink interiors. At long tables supporting a seemingly unending line of bowls, rows of women sort the pearls, a blindingly quick process that gestures to the skill of the female laborers and the unremitting demand for the commodity.

Another narrative in the film is introduced by way of Bunny Glamazon, an impressively tall woman whose pantsuit suggests that she is a Western supervisor at the factory. She sits downwind of a fan activated by workers that blows the scent of flowers directly to her nose, which becomes irritated. The sneezes that follow materialize heaping plates of food on the desk where she sits. As the film cuts between Bunny’s food-producing sneezes and the oyster-producing pearls, the correspondence becomes clear—Rottenberg positions both the workers and the oysters as unwitting accomplices in an activity associated with an overabundance of capital. Rottenberg’s witty vision of human labor, and more specifically female labor, was one of the high points of the 2015 Venice Biennale, where the artist presented the film in a purpose-built room that visitors entered by way of a small re-creation of the pearl factory. NoNoseKnows (50 Kilos variant) includes the projection room and adds a 50-kilogram sack of the pearls just outside the doorway.

NoNoseKnows (50 Kilos variant) supports the ICA/Boston’s commitment to time-based media, which includes works by artists such as Kader Attia, Paul Chan, and Ragnar Kjartansson. The work expands the current holdings through its exploration of global issues and labor conditions.