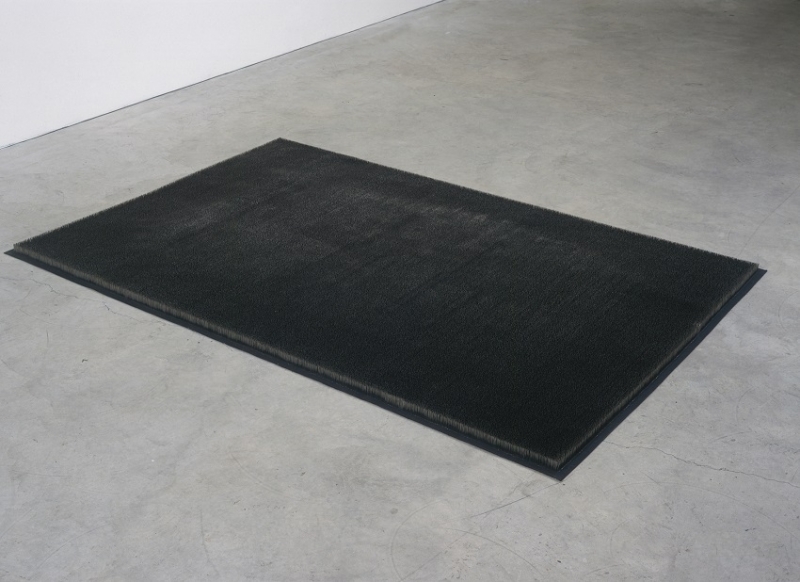 Mona Hatoum belongs to a group of artists that also includes Robert Gober, Felix Gonzalez-Torres, Doris Salcedo, and Rachel Whiteread, whose works defamiliarize everyday forms, transforming them into minimalist, conceptual, and often performative objects. Working across a variety of mediums, Hatoum often extricates the familiar forms of the domestic landscape—an armoire, chaise, or rug—from their normal context. Through the juxtaposition of contradictory materials, changes of scale, or the introduction of uncharacteristic elements, she infuses the familiar with an element of danger, references to violence, or the capability of producing bodily harm. By employing these transformative gestures, Hatoum engages viewers’ tactile imagination—her sculptures, photographs, and videos provoke viewers to imagine their own bodies in relation to these unruly objects. The myriad and often conflicting allusions simultaneously speak to the history of violence in the artist’s Palestinian homeland and the safety provided by the domestic realm.

Hatoum has created a series of “carpets” that refer to the minimalist floor sculptures of artists such as Carl Andre, traditional Muslim prayer rugs, and functional carpets. Pin Rug is composed of thousands of straight pins pushed through a needlepoint canvas. The combination of the dark support and the glistening pins gives the visual effect of a soft, lush surface. Though evoking an inviting carpet, like many of Hatoum’s sculptures, the object would cause pain if one were to stand or sit on it. Pin Rug subtly illustrates the dualities that mark Hatoum’s work: seduction and repulsion, pain and pleasure, religion and belief.

A compelling element in the ICA/Boston’s increasingly strong collection of sculpture, a cluster of works by Hatoum that includes Pin Rug forms part of a concentration of objects that investigate themes of war and violence by such artists as Kader Attia, Louise Bourgeois, and Yasumasa Morimura.