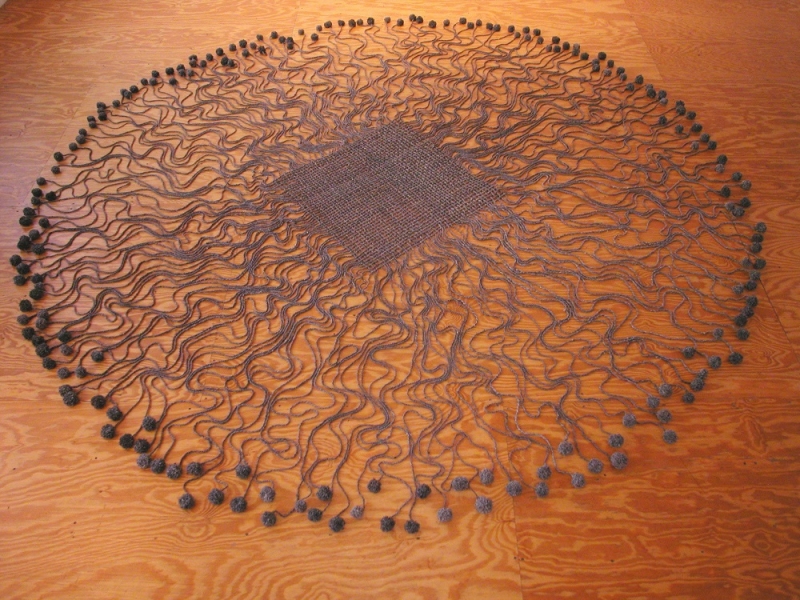 Over the past three decades, London-based Palestinian Mona Hatoum has focused on the narrow divide between the familiar and the uncanny. In the 1980s, she made video and performance work that position her body as the locus for an exploration of political and psychological identities. During the 1990s, she began to transform commonplace household objects—rugs, cots, or kitchen utensils—into large-scale sculptures that resemble threatening and monstrous instruments of torture. With these sculptures, Hatoum envisions a domestic territory that is not a place of protection and safety, but one of ambiguity and foreboding, suggesting themes of exile, displacement, and conflict.

Hatoum made Pom Pom City while living in Mexico as she was preparing for exhibitions in Mexico City and Oaxaca. During two month-long periods, she created works that draw on local curiosities, Mexican folklore, and traditional craftsmanship. Pom Pom City is made with natural wool from artisan weavers in Teotitlán del Valle in Oaxaca, an area known for its hand-woven rugs. Hatoum’s piece is an oversized rug, exhibited directly on the gallery floor. At the sculpture’s center is an interlocking grid of fibers, a reference to the tightly gridded plan of central Mexico City. Long strands of wool radiate from this point like rivers, roads, or tentacles, representing the chaos and growth surrounding the city. Each strand ends in a pom pom, calling to mind kitschy souvenir sombreros or other tourist trinkets. Like many of Hatoum’s sculptures, Pom Pom City plays with scale: in other works she has vastly enlarged a baby crib, a cheese grater, and the colorful birdcage exhibited in the ICA/Boston’s Made in Mexico (2004).

This work is one of several works by Mona Hatoum owned by the ICA, and resonates with the many works in fiber in the collection by such artists as Sheila Hicks, Alexandre da Cunha, and Josh Faught.