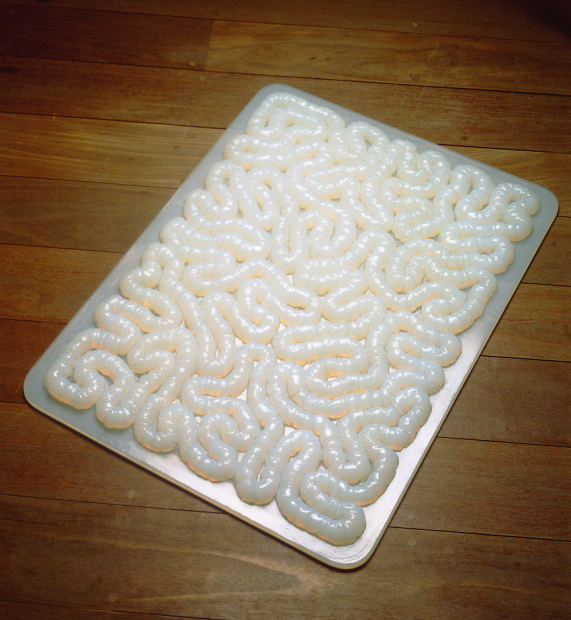 In her work over the past three decades, London-based Palestinian Mona Hatoum has often employed elements from the fragmented or eviscerated human body to elicit instinctual responses from viewers, creating jarring effects through suggestive textural and visual associations. In the 1980s, she used her own body in video and performance work to explore national, political, and psychological identity. During the following decade, she began to transform commonplace household objects into large-scale sculptures that in scale and material construction resemble instruments of torture. In these works, domestic territory is no longer a place of protection and safety, but one of foreboding and confusion. The implicit themes in the transformation of objects that remind one of “home” but have turned ominous are national and ethnic exile, displacement, and conflict.

Attracted by the glistening surface of Rubber Mat, we see on closer inspection that the spongy silicone has been molded to resemble coiled intestines. Although a welcome mat typically serves as an invitation to enter a home, Hatoum’s bizarre version invites only to repel. The artist fuses the pliant silicone and vivid bodily image to activate and conflate our sense of touch and feelings of disgust.

Rubber Mat forms part of a significant representation of works by Hatoum in the ICA/Boston’s strong and expanding sculpture collection, and joins works that address themes of the body by artists such as Louise Bourgeois, Kiki Smith, and Nick Cave.