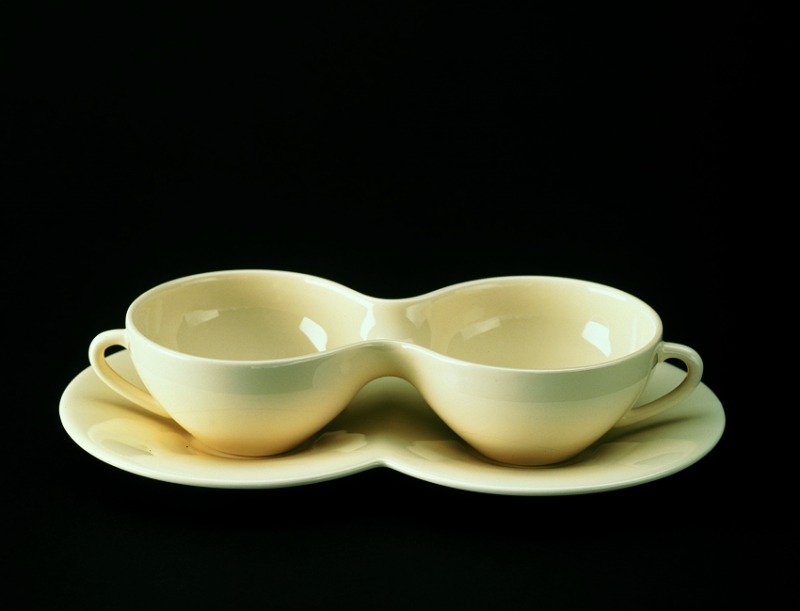 London-based Palestinian Mona Hatoum has long associated the familiar with the uncanny in an arresting and visceral oeuvre. In the 1980s, she made video and performance works that explore political, ethnic, and personal identity through the body, often her own. At the end of the 1980s, she began to focus on common domestic objects—including kitchen utensils and house furnishings—that she transmogrified into hostile large-scale sculptures. The domestic interior is no longer a place of protection and safety but the locus of ambiguous and foreboding mutation. In metaphorical terms, the transformation of the known into the threatening replicates the psychological effects of displacement, exile, and violence.

Perhaps the most defining feature of Hatoum’s work is her generation of multiple readings by means of simple transformative gestures. This is the case with T42, a pair of teacups fused together at the rim to create one drinking reservoir. The conjoining of the cups brings to mind the civility associated with tea drinking along with an image of the forced collaboration involved in sharing a vessel. In more political terms, the form can be construed as a metaphor of egalitarianism, a social condition in which resources are equally distributed and cooperation is demanded. But the twin-handled cup also conjures a possible battle over limited resources, a tug-of-war in which the contents of the vessel go to the victor.

T42 takes its place among works in the ICA/Boston’s growing sculpture collection that probe complex emotional and psychological states through simple forms. It also accompanies a number of other collection works by Mona Hatoum, as well as by artists such as Kader Attia, Louise Bourgeois, Willie Doherty, and Yasumasa Morimura that explore themes related to psychological as well as physical violence.