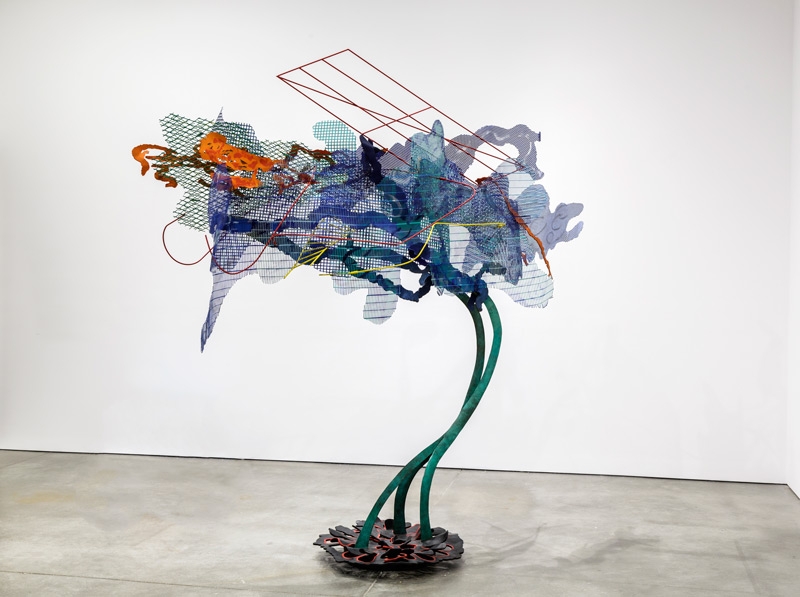 Sculptor, painter, printmaker, and filmmaker, Nancy Graves gained notoriety in the late 1960s for her realistic sculptures of camels. Throughout her career she explored the boundaries of art, especially its relationship to science, anthropology, and natural history. Her life-sized, realistic sculptures of camels made to look like taxidermy stood in stark contrast to minimalism and pop art in the late 1960s. After a period of working predominantly in painting and film, Graves returned to sculpture in the 1970s, though with diminished investment in verisimilitude and more integration of the playful lyricism of her paintings. In 1969, at the age of twenty-nine, Graves became the youngest person, and only the fifth woman, to be given a solo exhibition at the Whitney Museum of American Art in New York.

Graves’s Trace, a large-scale bronze and polychromed patina steel sculpture, is a paradigmatic example of this practice. The sculpture appears like a dynamic, wind-blown tree, its forked trunk of bright green rises from a red and brown foundation, with an undulating curve up toward the treetop. The canopy itself is composed of layered, multicolored sheets of grated steel, the amorphous forms of leaved branches punctuated by geometric lines and grids. Here, her enduring interest in the natural tends toward the poetic. As in much of her work, Graves approaches the natural world with a sense of wonder that endows her art with enigmatic beauty.

The addition of a large-scale sculpture from this period by Nancy Graves, one of the leading artists of her generation, introduces an important woman artist to the ICA/Boston’s collection and marks a major contribution to the museum’s holdings of sculptures by such artists as Louise Bourgeois, Tara Donovan, Rachel Harrison, and Keith Sonnier.

Gift of Ann and Graham Gund