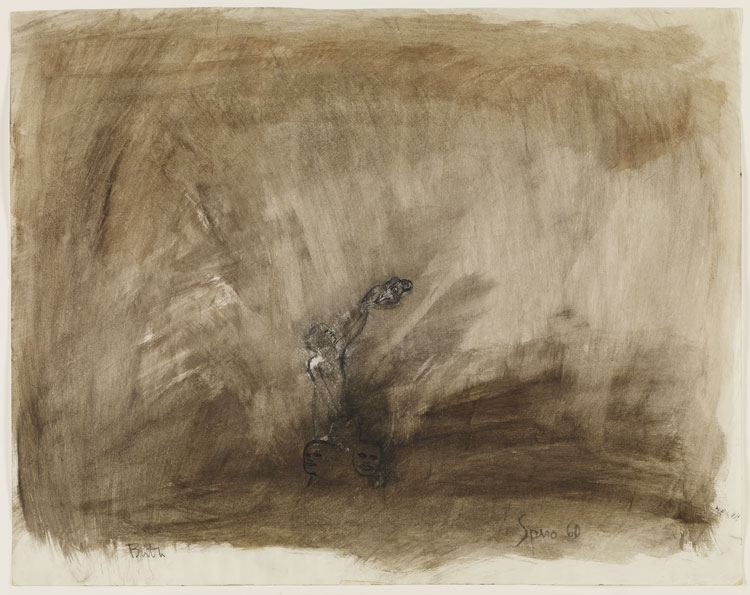 Throughout her more than sixty years as an artist, Nancy Spero maintained a commitment to socially and politically engaged art. In her paintings, collages, prints, drawings, and murals, she expressed stances that were antiwar, antiviolence, and, most notably, feminist. Spero was a member of a number of artist-activist groups, including the Art Workers Coalition, Women Artists in Revolution, and the A.I.R. Gallery, which dedicated itself to art by women. She consistently sought to meet what she considered to be the social obligations of the artist.

Determined to advance the representation of female experience in art, by the mid-1970s Spero depicted only women. Birth portrays the quintessentially female act of childbirth, an event that had been systematically excluded from art history. Spero’s representation of the act does not resemble the reality of childbirth—the woman stands, raising the infant in the air and seeming to thrust him or her forward, as if to emphasize the power that the ability to give birth confers. The image is rendered exclusively in brown, black, and off-white, and the background is filled in with rough brushstrokes. These qualities give the work the appearance of a prehistoric artwork. Spero often utilized ancient motifs and symbols, drawing on figures from Egyptian, Greek, and Irish sources.

Nancy Spero is a seminal female artist of the twentieth century. Birth augments the ICA/Boston’s collection of work made by the pioneers of feminist art, including Ana Mendieta, Joan Semmel, and Faith Wilding. 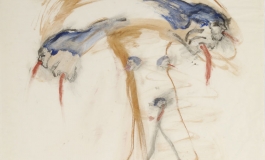