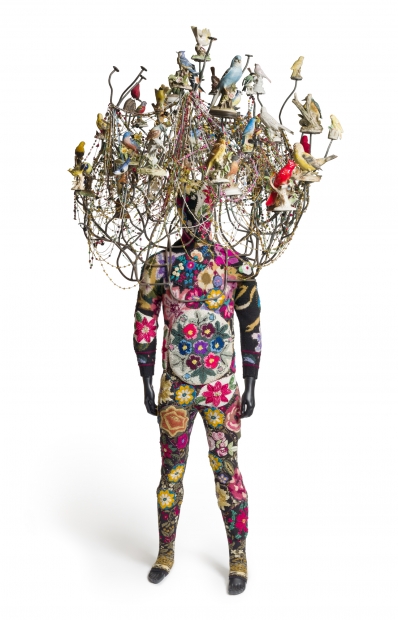 Since the early 1990s, multimedia artist and performer Nick Cave has been exploring the intersection of fine art, craft, performance, and material culture. He first gained widespread recognition in the art world for his Soundsuits—full-body costumes crafted from twigs, buttons, ceramic figurines, toys, and other objects he gathers from antique shops and flea markets. Cave first devised the Soundsuit as a protective “second skin” in 1991 in response to the racial profiling and beating of Rodney King by Los Angeles police officers. More recently, he has expanded his artistic expression to include paintings and sculptures that adapt the material and formal applications invented for the Soundsuits.

Although he often displays Soundsuits as sculpture, Cave and others also wear them as sound-generating costumes for live performances, photographs, and videos. At the top of this appliquéd outfit is an elaborate chandelier structure containing dozens of ceramic birds and strings of plastic beads. The work epitomizes Cave’s lavish, baroque aesthetic, a mirror of our culture’s excess and a radical reinvention of contemporary sculpture and craft.

The presence of the work supports the museum’s critical examination of the role of craft in contemporary art as seen in other collection works by Josh Faught, Arlene Shechet, and Haegue Yang.