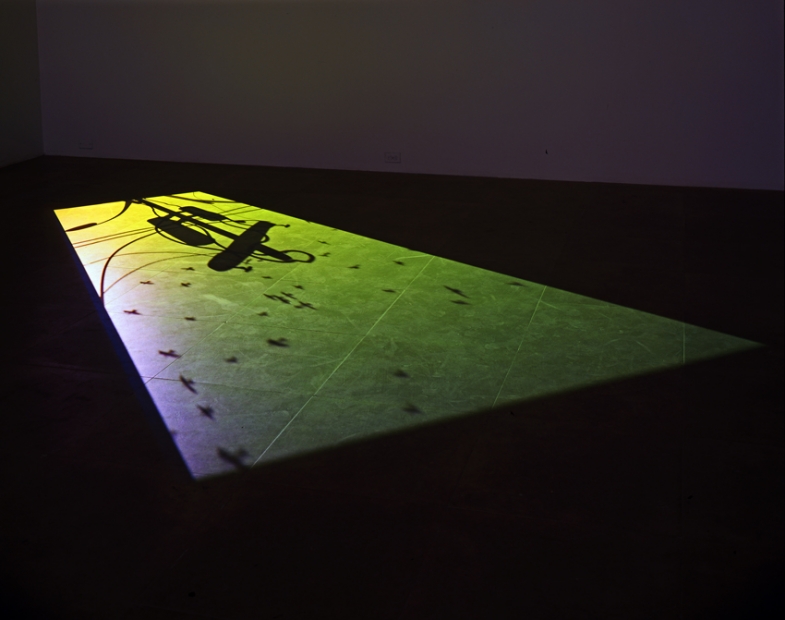 From the outset of his career, Paul Chan has worked as both an artist and a political activist. Using diverse media—film, animation, design, and performance—Chan often grapples directly with political issues, from creating a guide that offers protesters ways to intervene in the 2004 Republican National Convention to staging a play with residents of New Orleans’s Ninth Ward following the devastation of Hurricane Katrina.

1st Light is the first of a seven-part cycle of animations in which Chan addresses the themes of religion, politics, and art. A shape-shifting parable of politics and religion in a post-9/11 world, Chan’s animation is both morally and aesthetically resonant. Drawn on a computer and projected on the gallery floor, the simple but dramatic silhouettes in the work describe an apocalyptic vision of the world. Shadowy bodies fall, earthly objects rise to the heavens, and the audience is confronted with the meaning of salvation and faith in an era dominated by war, consumerism, and terror. Chan was the fifth artist chosen for the ICA’s Momentum exhibition series, and 1st Light was featured centrally in his installation.

The first work by Chan to enter the ICA/Boston collection, 1st Light signals the museum’s commitment to support important artists at emerging points in their careers, and to build a collection that reflects the key issues, media, and forms of the twenty-first century.

Gift of Kimberly and James Pallotta